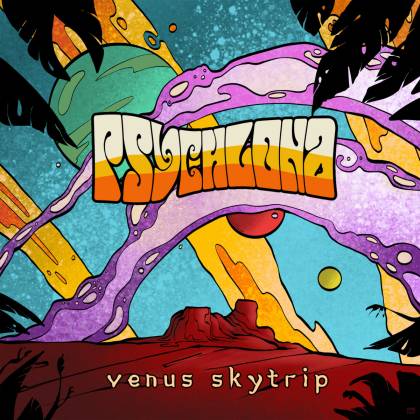 Despite being intermittently denied the chance to enjoy a hot, hazy summer, we always have records as joyously heavy and fuzzed-up as this to keep the sizzling dream alive. PSYCHLONA have already impressed, rising nonchalantly to the top of the aspiring stoner and space rock piles at their first attempt on 2018's "Mojo Rising", but "Venus Skytrip" is a much more absorbing affair than its predecessor.

Opener "Blast Off" is simply brilliant. Yeah, we've heard this lumbering, doomy strain of psychedelic rock before, but PSYCHLONA nail it with such verve that it feels genuinely fresh here. With a pulsing, krautrock undertow and plenty of lysergic embellishments, it's got all the attitude and punch of MONSTER MAGNET at their swaggering best, but with drug rock kitsch replaced by a tangible sense of cosmic wonder. "10,000 Volts" is even better: a master class in SABBATH-ian swing and bong-powered dynamism, it owes as much to the white-knuckle freak-outs of HAWKWIND and LOOP as it does to any obvious doom or stoner influences. This is spacious, hands-in-the-air stoner rock, wherein The Riff is king and everything else swirls wildly around its resonant core.

Likewise, "Blow" repurposes a textbook fuzz-rock chug and molds it into an grimly groovy hymn to altered states of (un)consciousness; both "Star" and "Edge Of The Universe" take a succinct approach to the same bold vision, with gleaming hooks and a heroic amount of bass-rumble heft. Not surprisingly, "Resin" is the album's most blissed out and blank-eyed moment, with a squalling crescendo worthy of ELECTRIC WIZARD. In contrast, "Tijuana" is a sublime, straight-ahead stoner thumper with shades of KYUSS and FU MANCHU.

It ends with "The Owl": nine minutes of suppurating, wildly trippy doom fizzing and shimmering with mounting muscle and might, until even the timidest sonic voyagers will be clambering on board the magic carpet. If you ever see an owl big enough to inspire riffs like these, do remember to run like fuck.

We appear to be living through something close to another golden era for stoner rock and doom right now. On this evidence, PSYCHLONA have the weed-addled chops to lead the charge from the front.