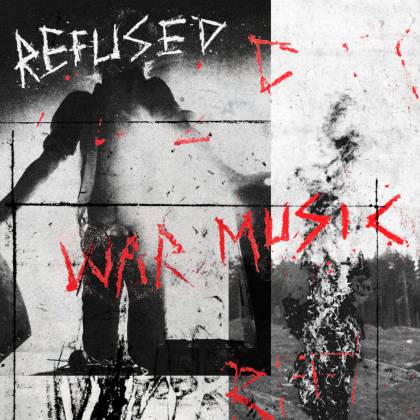 A couple of decades have passed since REFUSED unleashed its third album, which is the band's magnum opus: "The Shape of Punk to Come". The title was surely tongue-in-cheek, but the game-changing hardcore punk and post-hardcore album did, in fact, profoundly affect the direction of such underground music that followed with its memorable melding of punk, techno and jazz. REFUSED disbanded a mere matter of months following the album's release, surely contributing to the considerable posthumous reverence. This meant anticipation was high for the 2015 comeback album "Freedom", an effort that was true to form, but it arguably found REFUSED playing it safe.

The Swedes have shaken off the cobwebs since then, and now in 2019, "War Music" harks back to that pinnacle 1998 release by virtue of their impassioned, bold and adventurous approach to musical expression. They've spun that classic's frantic beats and maniacal freneticism forward into "War Music". It isn't as groundbreaking, but it does sound just as fresh and vital. "Malfire" storms forth with angst and tension, while "Violent Reaction" chugs along with metallic qualities delivered with REFUSED's signature maniacal flamboyance. Elsewhere, "Damaged III" rekindles the same kind of discombobulating madness that made "New Noise" the standout track on the nearly flawless "The Shape of Punk to Come".

Raging cuts like "Violent Reaction" and "I Wanna Watch The World Burn" are decidedly political. This is perfectly in line with the band's left-leaning social outlook. Whether or not one is on board with the act's Anarchist and socialist leanings, a song like "Blood Red" is just as catchy as it is hard-hitting. And sonically, if nothing else, these songs should find appeal amongst a wide array of heavy music fans.

The gentlemen of REFUSED aren't the young lads they once were. It shouldn't surprise anyone that they aren't trying to destroy boundaries as they once did. Instead, they parlay their established essence forth with even more confidence than before. They know who they are, and they know what they are good at doing. REFUSED continues to write and perform with heart and intensity. They are no longer shaping the face of punk that is to come. But they sure as hell just wrote a kick-ass album.