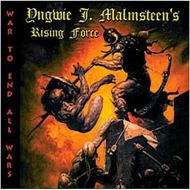 War To End All Wars

It's hard for me to imagine what YNGWIE MALMSTEEN must have been thinking when he allowed something as sonically hideous-sounding as this musical abortion to leave his hands and be sent to the pressing plant as a representation of his work. By far the worst-sounding of all his albums, War To End All Wars boasts an absolutely horrible drum sound and a guitar tone that is absolutely horrendous—so much so that this CD actually would have been much more credible if it contained the album's "rough" studio mixes rather than the completed product that the once-perfection-minded guitarist had clearly signed off on.

As far as the material is concerned, War To End All Wars is a largely forgettable affair, featuring songs that are essentially re-treading previously charted musical territory and that are lacking anything resembling the kind of killer hooks that YNGWIE's past musical high-points used to be chock-full of. Virtually everything on this CD has been heard before, and it almost always sounded so much better than it does here—from the standpoint of the production all the way down to the songwriting itself, which comes across as uninspired and workmanlike throughout the 14-song effort.

Whatever trip YNGWIE is on, I sincerely hope he snaps out of it pretty soon, because his standing in the rock world is about to hit a new low-point. War To End All Wars is a disastrously poor follow-up to the disappointing Alchemy release, and it is a clear indication that the Swedish guitarist has hit a creative snag—one that could seriously jeopardize his long-term career.