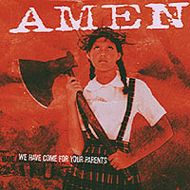 We Have Come for Your Parents

Having found the group's I Am/Roadrunner Records debut to be a rather average exercise in post-punk aggression with little in the way of quality songwriting, I had extremely low expectations for AMEN's sophomore effort, a release that vocalist Casey Chaos has very ambitiously dubbed "the most violent album in major label history". Produced, once again, by Ross Robinson (who also heads up the I Am label, freshly affiliated with Virgin Records after a less-than-amicable split with Roadrunner),We Have Come For Your Parents is pretty much a continuation of the direction the band had started on the aforementioned debut, albeit with a noticeable improvement in the overall sound, which is a bit fuller and thicker this time around.

Although AMEN should be credited for pursuing a style that has little in common with their Southern Californian counterparts, the group's tuneless, noisy approach gets tiresome very quickly, with Casey's obnoxious, high-pitched screaming proving to be more irritating than effective, in the process adding a touch of abrasiveness to the songs that is bound to turn off many a discriminating listener. Unsurprisingly, there are no obvious "singles" either, leaving one to ponder exactly how Virgin Records will be able to successfully market a band that, on its debut, shifted less than 15,000 copies, particularly when the expectations this time around are so much higher.

So is this indeed "the most violent album in major label history"? In my mind, that honor  still belongs to SLAYER and PANTERA, both of whom have made careers out of issuing crushingly-heavy albums that have consistently passed the gold sales-mark, while bands like AMEN continue to produce largely unlistenable, musically inferior material that has no chance of ever living up to the substantial hype that has preceded it.