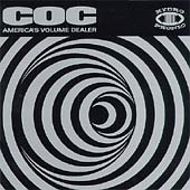 Four years after the group's Wiseblood release, CORROSION OF CONFORMITY have returned with a new album that sees the group sticking to a tried-and-tested formula without having made any attempts to update their songwriting in a way that would make it more consistent with the current music trends. Considerably more guitar-heavy than the ColumbiaRecords demos that were recorded during the summer of 1999  (three of which songs were re-recorded for this effort),America's Volume Dealer is a continuation of the classic Pepper-era C.O.C. sound that the band were dabbling in on their last couple of CDs (one that owes more to LYNYRD SKYNYRD than BLACK SABBATH), in the process completely belying the group's long-gone hardcore roots.

Although none of these 11 songs indicate that C.O.C. have completely lost their ability to compose quality material, there are no obvious standouts or single contenders ("Congratulations Song" was the label's pick, apparently),leading one to believe that the group have taken their songwriting as far as they could, and are now merely retreading previously charted territories. The production, too, appears to have suffered, presumably due to budgetary constraints, with the overall sound coming across as more "demo"-ish than in the past, and the drums in particular featuring an artificial/"triggered" tone that is a bit too fake-sounding for comfort.

As much as I'd wanted to love America's Volume Dealer, the sad truth is that C.O.C. have seen better days, and I'm fairly certain that they will never recapture their most magical moments from the past. Having said that, this is a well-crafted and musically uncompromising release that should please most of the group's die-hard fans.