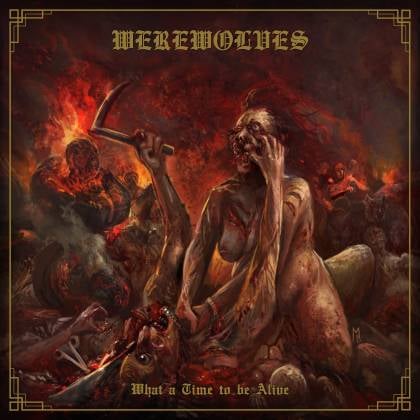 What A Time To Be Alive

01. I Don't Like You
02. Sublime Wartime Voyeurism
03. Mission Statement
04. Crushgasm
05. Unfathomably Fucked
06. Antisocial
07. Traitors And Bastards
08. A Plague On All Your Houses
09. They Will Pay With Their Own Blood

Barely a year ago, WEREWOLVES released their debut album, "The Dead Are Screaming". It was really fucking horrible and violent and angry and, let's face it, absolutely perfect for the general vibe of 2020. One year on, they've made another album that delivers more or less the same full-force boot to the pelvis, but with even more venom and vitriol behind each bone-shattering blow.

It starts with a bilious "One, two, three, four…" and then "I Don't Like You" erupts, with all the manners of a rabid warthog and armed to the teeth with some of the nastiest riffs in living memory. WEREWOLVES have form, of course, with former members of THE BERZERKER and AKERCOCKE in their ranks, but far from trading on past glories, the Aussies are very much carving their own fleshy trench here. The album straddles both flat-out death metal and hammer-attack grind, making the resultant hybrid sound like an actual bombing campaign. There's something stupidly exciting about the sheer knuckleheaded relentlessness of it all, but WEREWOLVES have songwriting chops too. If you want all-out war, there are plenty of bands that provide it without any attempt at writing a hook or chorus, but "What A Time To Be Alive" is oddly accessible, particularly for a record that sounds like someone driving a turbocharged tank through your living room.

"Sublime Wartime Voyeurism" has some neat, blackened melodic touches that add depth to the blitzkrieg; "Mission Statement" mixes D-beats and blasts at absurd speeds, but it's eminently pit-friendly and memorable too; "Unfathomably Fucked" is all jagged thrash riffs and scowling, abyssal chug. Every last bit of it sounds likely to jump through your speakers and punch you in the eye, just because you suck. If nothing else, WEREWOLVES certainly know how to read the room, and the room definitely needs raging death metal face-removers like "Traitors And Bastards": a song that owes its punchiness to an old-school ethos, but which rips with utterly contemporary levels of aggression.

The only slight drawback to "What A Time To Be Alive" is that it's so ferocious that it flies by in what seems like a fraction of its 35-minute duration. But if you have a stomach for the hard stuff, diving deeper into this idiosyncratic slab of diehard savagery may reap greater rewards than the expected black eye and broken nose. Either way, WEREWOLVES are definitely not fucking about.