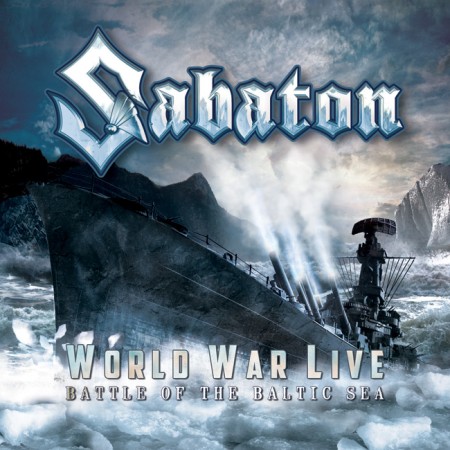 If there is one band that has really grown on me this year it is Sweden's SABATON. After finding new studio album "Coat of Arms" — my first exposure to the epic power metal act — an effort I found solid and most enjoyable, it was the dive head first into "World War Live: Battle of the Baltic Sea" during which SABATON sunk its claws in deep. It resulted in me not only revisiting "Coat of Arms" (and triumphant anthems like "Aces in Exile"),but also ordering a copy of the special edition of "The Art of War" in which I reveled. "Ghost Division", "Cliffs of Gallipoli", the folk-infused "Swedish Pagans", and "40:1" (a diamond of a song) proved as catchy and invigorating as they did inspiring and historically informative. Whatever I'd missed the first time around with "Coat of Arms" I'd gathered up and devoured during numerous sessions spent enjoying the hell out of "World War Live". Color me hooked.

Those not familiar with the music of SABATON are strongly advised to start with this insanely energetic live album. Go all in and grab the special edition, which includes a bonus 12-track collection of songs from the 2010 "World War Tour" and a bonus DVD. Though I can't comment on the bonus products, as they were not included with my promotional copy (a purchase will soon rectify that),I can make a strong recommendation based alone on the 15-track performance captured during the SABATON cruise (as in ship and out to sea),the disc sub-titled "Battle of the Baltic Sea". The collection of choice cuts serves as a great overview of SABATON's spirited blend of well-researched lyrics (skillfully written and patterned for verse-chorus format) and classy, keyboard-colored power metal anthems that are built for rabid crowd participation, as you'll hear loud and clear during the set. The sound quality is superb too of course.

The live adaptions of the studio material, including all of the songs mentioned earlier, as well as tracks from 2005's "Primo Victoria" and 2006's "Attero Dominatus", are brought to life in a way that mandates fist pumping and chorus sing-alongs. Even stripped necessarily of some of the studio layering and effects, the bombast is retained and the playing is first rate. Joakim Brodén is a commanding lead vocalist and frontman and the backing vocal support he's given is spot on. Close your eyes and you'll feel as though you're right there with the band, which is exactly the effect a live album should have on the listener. Start your own personal SABATON adventure with "World War Live: Battle of the Baltic Sea". You won't regret it.