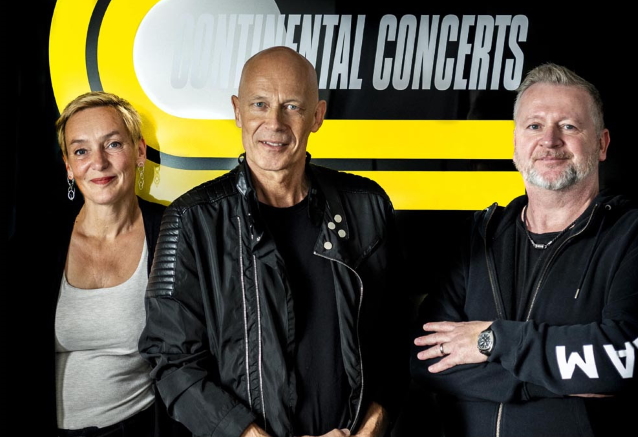 Lange said: "I feel very honored that a band like ACCEPT has placed their trust in me as manager. ACCEPT are currently working in the studio and I am very happy about this new challenge. I hope to add more building blocks to the impressive career of the band."

Added Hoffmann: "A long friendship with Continental Concerts turned into an even longer and closer business relationship which became the most successful years of ACCEPT. In my career of well over 50 years, I have put all my eggs in one basket: Hard work and firm friendships! Continental Concerts have become my family and the best home for ACCEPT! I pass the torch to Continental's Antje Lange and couldn't have a better team that enjoys my complete trust for the career of ACCEPT."

For many years, Continental Concerts' Gerald Wilkes has worked with ACCEPT as the band's booking agent.

In a 2014 interview with MusicInterviewCorner, ACCEPT guitarist Wolf Hoffmann, who is married to Gaby, credited his wife with coming up with the visual imagery for ACCEPT. He explained: "Well, my wife and our manager, Gaby, has a lot of these ideas over the years; she's responsible for a lot of the lyrics and a lot of the album covers, a lot of ideas. Everything around the band, really, in one way or another way goes back to her ideas. She's really the invisible, silent force behind this band. Sometimes we're just like puppets on a string and she's guiding us from above. A mind controller."

After then-ACCEPT bassist Peter Baltes denied that he was jealous about the fact that Wolf was married to ACCEPT's manager, Hoffmann said: "This has been going on for so long. I mean, I've known Peter for, what? 40 years now. Can you imagine? We've been playing and writing songs together for all these years, so something seems to work here."

This past July, ACCEPT resumed recording its new studio album. The sessions for the follow-up to 2017's "The Rise Of Chaos" are taking place remotely, with producer Andy Sneap working at his studio in Ripley, Derbyshire, England and guitarist Wolf Hoffmann laying down tracks in his hometown of Nashville, Tennessee. The project is being completed using Steinberg's VST Connect Pro, a fully featured, remote recording solution that lets anybody record a musician or other performer in professional quality, regardless of where each of them is on the planet. All they need is an Internet connection and a computer.

ACCEPT's upcoming album will mark the band's first release without Baltes, who exited the group in November 2018. He has since been replaced by Martin Motnik.