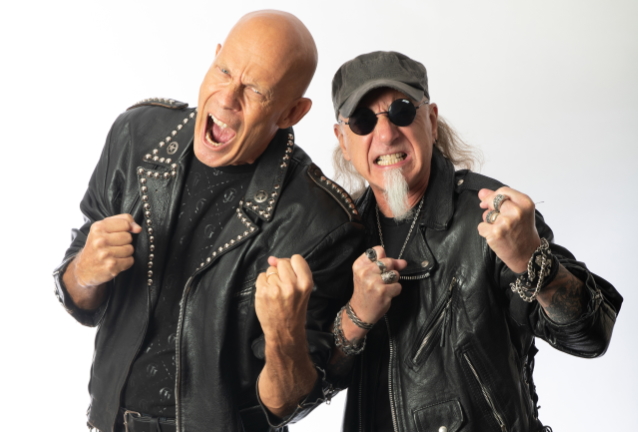 ACCEPT's WOLF HOFFMANN On MARK TORNILLO: 'We're Not The Biggest Buddies In The World And Probably Never Will Be'

In a new interview with Sweden's RockSverige, ACCEPT's Wolf Hoffmann opened up about his relationship with the band's lead singer of the past 11 years, Mark Tornillo. He said: "Well, we've found a way to accept each other and work together, but, to be totally honest, we're not the biggest buddies in the world and probably never will be. I don't know. There's something… He grew up in New Jersey and I grew up in Germany, and maybe that has something to do with it. At least we work together really well and we respect each other, and he's a fucking brilliant singer, so it seems to work whatever recipe we've found. I'm not trying to really analyze it too much, but I can definitely say that we have different views on a lot of things, and that's okay. It seems to be working and the common ground is our music and the metal we make."

Illustrating the differences between him and Tornillo when it comes to their personal views, Wolf discussed the lyrical themes covered in the new ACCEPT song "Sucks To Be You", which will be featured on the band's upcoming album, "Too Mean To Die".

"That's actually a song that was written by our new bass player, Martin Motnik, and I'm very proud of him, because he just recently joined the band and he contributed a lot of good stuff for this album and that's one of them," Wolf said. "He actually wrote that riff and came up with the chorus idea. Even though it sounds very typical ACCEPT, I love it. It's easygoing and fresh and in your face. I think lyrically he was originally talking about [Donald] Trump [laughs], but I think secretly Mark changed it around so it's not obvious that it's about Trump, and there you have it. Even within the band, we have political opposing views, I believe, but we try to stay neutral as much as we can."

"Too Mean To Die" will be released on January 15, 2021 via Nuclear Blast. The LP will be the group's first without bassist Peter Baltes, who exited ACCEPT in November 2018. He has since been replaced by Martin Motnik. ACCEPT's lineup has also been expanded with the addition of a third guitarist, Philip Shouse, who originally filled in for Uwe Lulis during last year's "Symphonic Terror" tour, before being asked to join the band permanently.