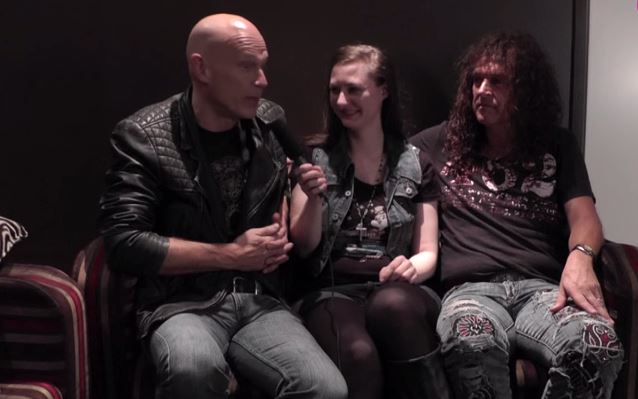 ACCEPT's WOLF HOFFMANN Says His Wife Is 'Invisible, Silent Force' Behind The Band

MusicInterviewCorner conducted an interview with guitarist Wolf Hoffmann and bassist Peter Baltes of the legendary German/American metal band ACCEPT on September 28 in Helsinki, Finland. You can now watch the chat below.

Asked about ACCEPT's early image, when they were often seen dressed in army uniforms, Wolf said: "That was the time of 'Russian Roulette' and 'Metal Heart' and those years back in the '80s. Yeah, it was just what we did back then. It was fun. It was a humorous attempt to make fun of the whole military aspect of things. But in our lyrics we were always dealing with that subject in a very serious manner, but on stage it wasn't meant to be all serious. It was just a look. It was good."

Regarding who was responsible for coming up with the visual imagery for ACCEPT, Wolf said: "Well, my wife and our manager, Gaby, has a lot of these ideas over the years; she's responsible for a lot of the lyrics and a lot of the album covers, a lot of ideas. Everything around the band, really, in one way or another way goes back to her ideas. She's really the invisible, silent force behind this band. Sometimes we're just like puppets on a string and she's guiding us from above. A mind controller."

After Baltes denied that he was jealous about the fact that Wolf is married to ACCEPT's manager, Hoffmann said: "This has been going on for so long. I mean, I've known Peter for, what? 40 years now. Can you imagine? We've been playing and writing songs together for all these years, so something seems to work here."