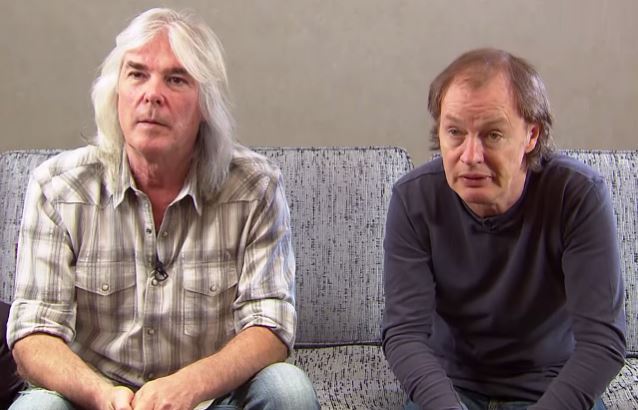 AC/DC's ANGUS YOUNG On MALCOLM's Health: 'The Physical Side Of Him Is Great'

AC/DC guitarist Angus Young and bassist Cliff Williams were interviewed on the November 18 edition of "The Men's Room", which airs on the Seattle station KISW 99.9 FM. You can now listen to the chat using the audio player below. A couple of excerpts follow (transcribed by BLABBERMOUTH.NET).

On continuing as a band after founding guitarist Malcolm Young was diagnosed with dementia:

Angus: "It's pretty much who are and what we do. We've always been a band that… we kept going. Malcolm's thing is due to illness. But he hung in there as long as he could. And he said, 'Keep going.'"

Angus: "Physically, he's healthy. Though he did have a few other… He had quite a few things. He had a lung operation, he had a heart operation. He seemed to get everything hit him at once, besides his dementia. So he had quite a lot of things going on. But the physical side of him is great, because he got the best treatment for his lungs and for his heart. And he's also… at the moment, he's in good care. He's happy himself, because being well looked after."

On having Angus and Malcolm Young's nephew Stevie Young step in to play guitar on AC/DC's new album, "Rock Or Bust":

Cliff: "Stevie has been out with us in 1988, so it was obvious for us [to ask] Stevie to come on in and do what he's doing. And it worked very well. Stevie is very much like Malcolm in his playing and personality-wise, so to find that was very… It was an obvious choice, as I say. Mal plays in a very unique way, and Stevie plays right along the same way. For us, it was a good fit."

On whether Phil Rudd's legal troubles and Malcolm's absence have reinvigorated the band in a way:

Angus: "Everything's a challenge. The thing that happened with Phil is something that he got himself into, so Phil's gotta sort his life out. But, for us, we just keep moving on, and that's always been our way."

On Phil Rudd's performance on "Rock Or Bust":

Angus: "When he got behind his drum kit, he plays like… he's a great drummer. Again, over the years, I think he's let himself go. I'm talking away from the drum kit."

Cliff: "It'll be a world tour, 'cause we wanna get to everybody. We don't really know at this point how many shows we're gonna do or how long it's gonna be; it's still in the works."

AC/DC's new studio album, "Rock Or Bust", is set to arrive on December 2.

The band officially announced in September that Malcolm would not be returning to the lineup.

Dementia can be reversed when it's caused by dehydration or other treatable conditions. But most forms of dementia worsen gradually over time and can't be corrected.