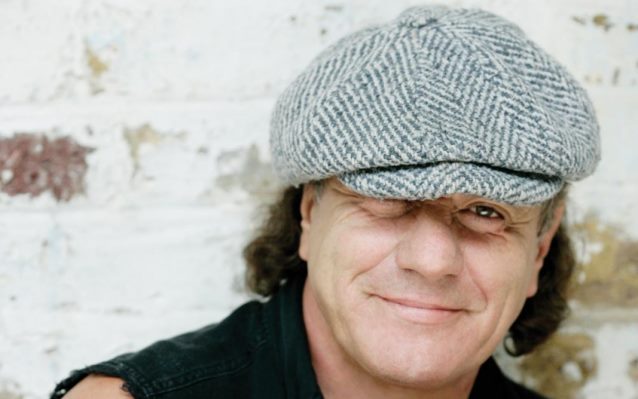 AC/DC's BRIAN JOHNSON: 'Cars That Rock' Series To Air In The Spring

A new series hosted by AC/DC frontman Brian Johnson, "Cars That Rock", will air in the U.K. in the spring on Quest, Freeview Channel 38.

"Cars That Rock" is described as a series of six 60-minute episodes in which Brian looks at six of his favorite makes of car (three from the U.K. and three from other parts of Europe). Brian races some of the cars in professional races and he also drives other cars at high speed.

In a 2011 interview with SportsIllustrated.com, Johnson stated about the similarities between conducting an arena full of fans and a race car full of horsepower and mayhem: "You have to do them to understand what I'm talking about. There are very few people who have ever had that unique experience. When you go on stage, you go with four other lads, and in my case I've got four of the greatest guys on the planet to play with, my friends, great lads. [On stage] the flag drops, kind of, and you come out and you start, and it's the same as racing. You can't give too much too early. You can't dive into that first corner. You've got two and a half hours to go. You've got to bring it up and keep it going. You can't just give it all away and have the rest of it be pretty boring. And then it's the same in racing. You can't be a big flurry of arms and fists and fists and arms because you'll end up in the grass, screwed up or whatever. It's a case of using your head."

Regarding his love of cars, Brian said: "I love the way they look, I love the way they sound. It's probably because I was born in a small mining village and it's probably because there wasn't many cars there. The doctor had a car, the foreman had a car. The local policeman would have a car, but we lived in government housing and there just wasn't many cars. You might get your odd one but it was all motorbikes and sidecars. Petrol was still rationed and the cars were still ... a lot of them were pre-war cars and just horrible and black. It was dull and turgid. . . Suddenly, in the mid-'50s, there was something. There was the Nash Metropolitan. The first one I ever saw I was like, 'Wow, it's two-toned.' It just looked different. It was gorgeous. Then the Jowett Javelin, which was stunning. And then cars started turning into these beautiful objects. To me they did, anyway, with these bright colors and blues, and then the Minis. England was the king of the world. We had THE BEATLES, we had the Mini. We still had an army that could fill a football stadium. It was a great time and it was swinging England. And in America, the great thing was, cars and rock and roll came together. The '50s ... watching an Elvis Presley movie, these beautiful Cadillacs, gorgeous, bright red. They were works of art on their own. Of course, they were massive. You couldn't turn a corner in them, but who cares when you have your arm round a beautiful girl, driving down the beach at sunset? It was just stuff my dreams were made of. And it just fed my passion."