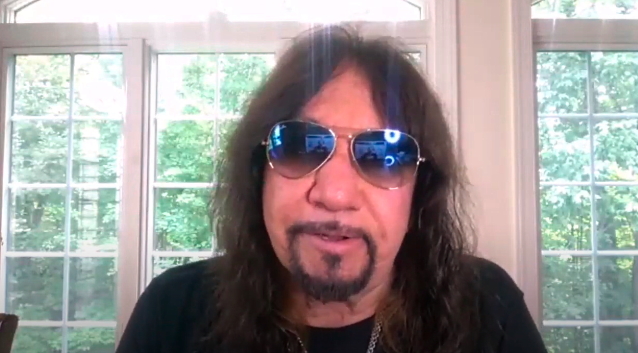 ACE FREHLEY: 'DONALD TRUMP Is The Strongest Leader That We've Got On The Table'

Ace Frehley says that Donald Trump is "the strongest leader that we've got."

The former KISS guitarist gave his opinion of America's 45th president while discussing his rendition of the CREAM classic "Politician" which appears on his upcoming covers album "Origins Vol. 2".

"I don't think politics and rock and roll mix — in my opinion," Ace told "The Cassius Morris Show" in a new interview (see video below). "And I try to stay away from that as much as I can. I mean, once in a while, I'll make a crack. I will say I'm a Trump supporter.

"All the politicians have had skeletons in the closet," he continued. "But I think Trump is the strongest leader that we've got on the table."

Frehley previously expressed his support for Trump during a December 2018 appearance on the "Juliet: Unexpected" podcast. At the time, he said: "I hate politics. I don't like talking politics, and I don't think politics and music mix. I really frown on musicians who get up on a platform and start talking about the president or complain about... I just don't think it belongs. I'm an entertainer. There's no reason to bring up politics. Let me play my guitar and write songs and entertain people. That's my job."

He continued: "Let me say this about Trump. Whether you love him or hate him, if you're an American and you're a patriot, you should get behind your president. He was elected. We live under the Constitution of the United States, and you're supposed to support your president. Love him or hate him, you're supposed to support him, or go move to another country.

"Being American, we have the right to free speech, and I'm all for everybody putting their two cents in on everything," he added. "But when musicians or actors get really verbal and jump on a bandwagon against our government, I don't agree with that."

"Origins Vol. 2", the sequel to Ace's 2016 collection of cover songs that inspired the former KISS guitarist, will be released on September 18 via eOne.

Frehley has released two songs from "Origins Vol. 2" thus far: a cover of the classic THE BEATLES track "I'm Down", featuring a guest appearance by ROB ZOMBIE guitarist John 5, and a rendition of DEEP PURPLE's "Space Truckin'".