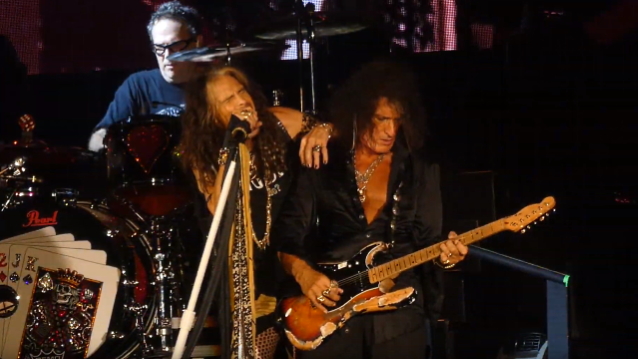 AEROSMITH Is Continuing To Play Shows Without Drummer JOEY KRAMER

Fan-filmed video footage of AEROSMITH's August 18 concert at the Borgata Event Center in Atlantic City, New Jersey can be seen below.

The band has played the last few shows of the "Deuces Are Wild" tour without drummer Joey Kramer, who is still recovering after twisting his ankle during rehearsal. Filling in for him is Kramer's drum tech, John Douglas.

This is not the first time AEROSMITH has performed without Kramer. This past April, AEROSMITH played two shows in Las Vegas, Nevada without Joey after the drummer had a "minor accident" that resulted in a shoulder injury.

Back in August 2014, AEROSMITH canceled a California concert because Kramer was dealing with "heart complications" that required immediate surgery. The musician later revealed that he had an angioplasty, explaining that it was "just strictly a hereditary thing. There's a family history, and I was the victim. But no more."

Kramer missed a week's worth of AEROSMITH shows after his 2014 surgery — his son Jesse filled in on drums — before getting back to work.

"It wasn't my time," Kramer said at the time. "It wasn't time for my ticket to be punched. And so I got fixed, and I'm back 150 percent, and everything is as good as it can possibly be."

AEROSMITH is scheduled to play 17 more shows in Las Vegas before the end of the year — four in September, four in October, seven in November, and two in December. The band also has a multiple-night "Deuces Are Wild" engagement at an MGM property in Springfield, Massachusetts.