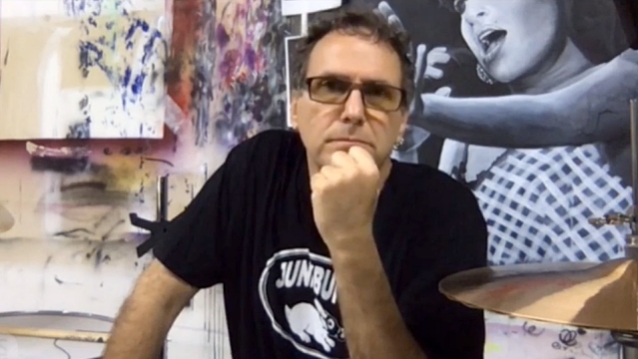 AEROSMITH's drum tech John Douglas told the Houston Chronicle that he had six hours to learn about 16 or 17 songs before he played his first gig last summer as Joey Kramer's temporary replacement.

"Time can sometimes be your enemy," he said. "Having a lot of time can make you obsess about something like this. So having little time is an upside."

Douglas ended up playing a number of shows with AEROSMITH as part of its "Deuces Are Wild" Las Vegas residency, and joined AEROSMITH and live on stage with RUN-D.M.C. at this year's Grammy Awards.

"So that's me," Douglas added. "This drum tech guy from Montgomery, Texas, who played the Grammys with AEROSMITH. Obviously I didn't grow up wanting to be a drum tech. I wanted to be a drummer. So I was honored to fill some famous shoes in an iconic band."

Kramer reportedly twisted his ankle during rehearsal, forcing him to sit out AEROSMITH's "Deuces Are Wild" tour dates.

Last October, Douglas told Rock Titan that he had no reservation or reluctance to take on the job when he was first approached about it. "Actually, I'm not even sure they even asked me — I think they told me," he explained. "It's kind of a blur. It was a show day, and I was in the building. Obviously, the band doesn't do soundcheck typically, so the crew does — we do a crew soundcheck, a crew jam. So we had just started that when I got the phone call from Steven [Tyler, vocals], saying that Joey couldn't play. Yeah, I don't remember actually being asked. And I would have said 'yes.' Maybe I was [asked] — I don't know. I've done this before with other bands a couple of times, but it had been a while. And it's always, obviously, unexpected. So, it was just a matter of, 'Okay. Yeah.'"

Kramer sued the rest of AEROSMITH in January in a bid to perform with this bandmates at two Grammy-related events. But a Massachusetts judge eventually ruled against him and the group played without Kramer.

After Kramer got injured last year, Douglas filled in for a few gigs during AEROSMITH's residency. Kramer did, however, perform with the rest of AEROSMITH in July at the Twin Cities Summer Jam in Shakopee.