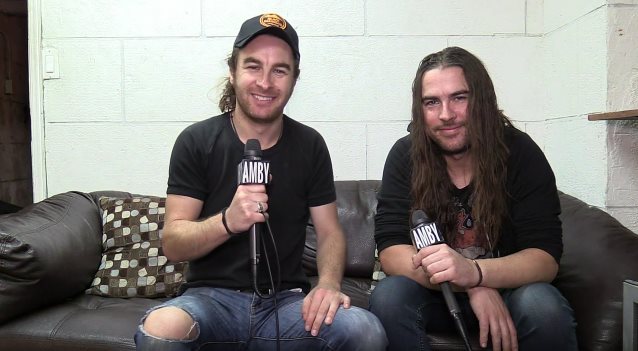 AIRBOURNE Frontman: 'You Have To Have Fun With Rock And Roll'

A Music Blog, Yea! conducted an interview with Joel and Ryan O'Keefe of Australian hard rockers AIRBOURNE prior to the band's October 7 show at The Opera House in Toronto, Ontario, Canada. You can watch the full chat below. A few excerpts follow (transcribed by BLABBERMOUTH.NET).

Ryan: "It took a bit. [It's] the first record we recorded in Australia, but to finally have it out, is a big relief. The reception has been really good. We couldn't be happier."

On the band's motto of "No ballads, no bullshit":

Joel: "I said it in an interview about the record, then Dante [Bonutto], our U.K. label manager said, 'Hey, we should put a sticker on [the record].' We said 'That's a great idea!' So we did. That's where it came from."

On the band's sense of humor:

Joel: "You have to have fun with rock and roll. That's what it's all about. Either you do it all or nothing. You can't half-ass a song like 'Do Me Like You Do Yourself'. The lyrical content has to be what the title is. You can't sort of… you can't half-ass it. You have to go all the way. It was funny in the studio when we were recording it. The last line is 'Do me, do me, do me, do me like you do yourself. Do me before I do myself.' That's how the song finishes. You got to go all the way."

On the band's drinking habits while on tour:

Joel: "Yeah, [we drink] quite a bit. Basically, you know whatever situation you find yourself, you know you're doing the wrong thing. You know it's bad, but you're really enjoying it, so the hell with it. You're going to do it anyway and then deal with the consequences later."

On "It's All For Rock And Roll", their homage to late MOTÖRHEAD frontman Lemmy Kilmister:

Ryan: "We had the riff and song. The song was always about rock and roll, but we felt…it was the eleventh hour, even though we had the riff for a while, but the lyrics weren't written. It was one of those things where we felt it wasn't hitting the mark. I think [producer] Bob [Marlette] was saying, 'C'mon guys, you can do better.'"

Joel: "He felt we had the music down, but we needed to sing something. It almost got cut from the record."

Joel: "I was writing them in the hotel that night, and the next day I came in and sang it. It was the last day in the studio. It's awesome when it happens for the right reason. We wanted to do it at the beginning of the record, but we didn't have the right song. This one just jumped out and we went 'This one!'"

On how audiences have been reacting to the band's new material:

Ryan: "The reception has been really great. Album number four, people were waiting for it and in the end, and we couldn't have had a better reception for it. We just look forward to touring, obviously, North America and Europe, U.K., and keep going back and forth as much as we can."

On what have been some of the more "rock and roll" moments on the tour:

Joel: "I fell off the stage during the last song and I tore ligaments in my foot, and cracked a few ribs, then basically, I've had to have an air cast on the thing for every show since, but tonight and last night, I'm going to go without it and tape it up. I don't know how to tape my foot; I've been going on YouTube, looking at figure-8 tape and going 'I think that's what I'm going to do.' There's all of these hockey guys going 'You got an injury, you got to get back in the game, man!' But they were going too quick. I know it's like that, but I sort of guessed, so that's rock and roll, to wing it."