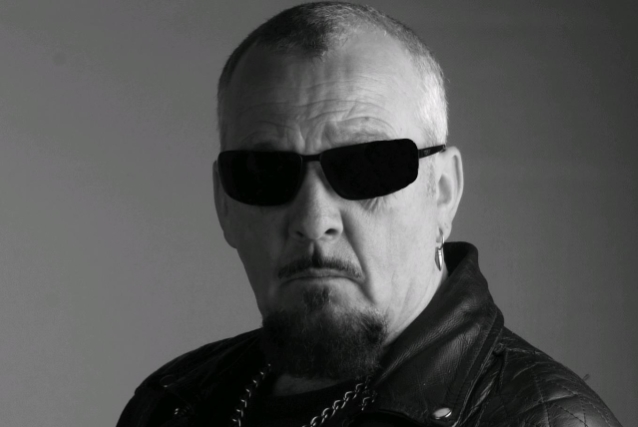 Original JUDAS PRIEST singer Al Atkins spoke to MusicRealms about how the first version of the band came together 50 years ago.

"The first lineup was formed in 1969 with 18-year-old John Perry on guitar, but after a few months of rehearsing, tragedy struck when he committed suicide," he said. "Drummer John Partridge, bassist Bruno Stapenhill and myself decided to carry on and dedicate the band to him. A few weeks after his funeral, we started auditioning guitarists to take his place and one young lad who came was Kenny 'K.K.' Downing, but we felt he wasn't experienced enough and the job went to Ernie Chataway from Birmingham. He was a great-looking kid and a mean guitar player who mentioned a band he once jammed with of the name EARTH and they had now changed their name to BLACK SABBATH and we thought that was a great name and we should look for something similar. And Bruno suggested JUDAS PRIEST, which we all thought was good and people would remember it."

Asked what those early days were like, getting his band off the ground, Atkins said: "They were pretty hard times. You could always get the odd pub gig, but we always tried for bigger and better things. Alan Eade from Ace Management saw we had potential and put us on his books and took us into the studio and asked me to write two commercial songs, which I did, called 'We'll Stay Together' and 'Good Time Woman'. It got interest from a couple of record companies. We did a live audition next, and one of the companies, Immediate Records from London, signed us up and we threw a champagne party at Alan's house. Next for us was a tour of Scotland, but our drummer pulled out, so I ended up playing drums and singing too — and we fired the drummer on returning home. Then we found out the record company went bust and Bruno had an offer from another band to tour Denmark and took it, so that was the end of JUDAS PRIEST Mark One. Short and sweet. I decided to carry on regardless and look for another lineup and discovered a young band called FREIGHT rehearsing at a local church school run by a fat Vicar named Father Husband or the nickname 'Holy Joe.' One of the lads was Kenny 'K.K.' Downing on guitar, who I had met before. The other two were John Ellis, drums and Ian 'Skull' Hill on bass. I asked if they needed a singer, and they all said yes, and I suggested that they use my old band's name, JUDAS PRIEST, and they all agreed that it was a better name, so JUDAS PRIEST Mark Two was born. It was now towards the end of 1970 and we went back into the studio to record another two of my songs, 'Mind Conception' and 'Holy Is The Man', and hit the road again. We climbed the ladder of success fairly quickly over the coming years, opening up for loads of bands like STATUS QUO, SLADE, BUDGIE and THIN LIZZY, to name a few, and playing over 150 gigs in 1972, but that elusive record deal never came our way. I was now the only one married with a small daughter, and money was always tight, and the more we earned, the more overheads we got, so without that record deal or financial backing, I decided to leave in May 1973. One of my last gigs was opening for BUDGIE at Liverpool's St. Georges Town Hall."

Atkins is the co-writer of several PRIEST songs which are included on the band's first two albums, "Rocka Rolla" and "Sad Wings Of Destiny", both of which eventually went gold. Atkins co-penned the heavy metal classic "Victim Of Changes", which was a combination of Rob Halford's song "Red Light Lady" and Atkins' own "Whiskey Woman". He also co-wrote "Winter", "Never Satisfied", "Dreamer Deceiver" and "Caviar And Meths".

JUDAS PRIEST bassist Ian Hill penned the foreword to Al Atkins's autobiography, titled "Dawn Of The Metal Gods: My Life In Judas Priest And Heavy Metal". The book, which was written with Neil Daniels — a freelance rock writer and heavy metal fan who befriended Atkins during the writing of Neil's book "The Story Of Judas Priest: Defenders Of The Faith" (Omnibus Press) — was released in 2009 via Iron Pages.