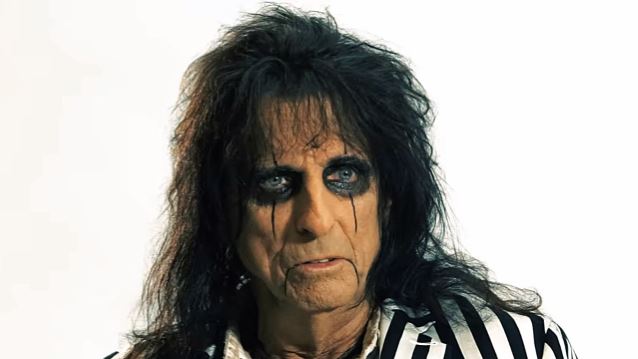 ALICE COOPER Has Begun Recording Demos For Next Album

Alice Cooper has begun recording demos for his next studio album, which may or may not feature contributions from the surviving original members of the ALICE COOPER band: bassist Dennis Dunaway, guitarist Michael Bruce and drummer Neal Smith.

During an interview with The Arizona Republic about this year's annual Christmas Pudding event, Cooper revealed that he started tracking demos for his new disc on December 5 with longtime producer Bob Ezrin once again behind the boards.

"We're recording demos right now," he said. "We're writing and recording demos. We have three songs from the original band that we're gonna look at and see if we can turn them into something. If not, we tried. But Neal and Mike and Dennis and I wrote songs together. And what we always do, we know the best ten songs are gonna make the album. It doesn't matter where they came from. I'm gonna always write the lyrics. And I'm gonna always arrange it. And Bob's always gonna produce it. If the song comes from Neal, Mike and Dennis, great! I would love that. We have those songs sitting there. We just have to see if they fit in."

Cooper added that there is "not really much of a concept" for his forthcoming effort. "It's gonna be a pure riff-rock-and-roll album," he said. "If anything, we gonna try and make it as close to 'Killer' and 'Love It To Death' as possible."

As previously reported, Cooper reunited with Dunaway, Bruce and Smith for a surprise set at one of Dunaway's book signings in 2015, and a special seven-inch single containing two songs from the performance was made available last month for this year's Record Store Day Black Friday.

Ezrin produced Alice's original multi-platinum "Welcome To My Nightmare" album in 1975, as well as Cooper's most recent effort, 2011's "Welcome 2 My Nightmare".