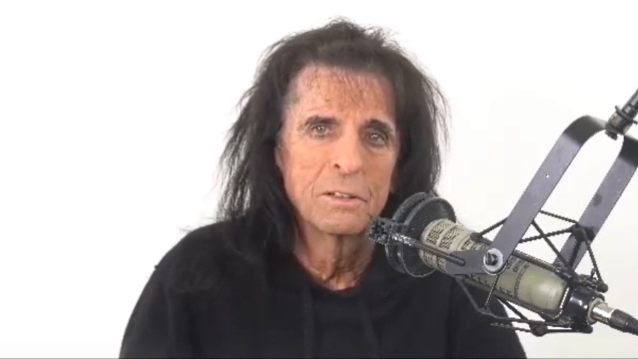 ALICE COOPER Likes The Idea Of Recording Next Album On The Road: 'If You Get The Right Players, You Can Do Anything'

In a new interview with Australia's Heavy, Alice Cooper confirmed that his next studio album will be recorded on the road with the current lineup of his solo band. "I like it — I like the idea," he said (as transcribed by BLABBERMOUTH.NET). "I brought up the idea because my stage band is so tight. They're not even on [my new] album ['Detroit Stories']. But they're so tight that they can play anything. And I said, 'Well, then why don't we write the songs on the road about the road? Let's write the songs about what happens on the road.' Or just it could be funny, it could be tragic, it could be whatever. I said, 'But let's make this album rock, like you guys do. And I'd love to play it live during soundchecks.' Instead of playing 'Eighteen' or 'School's Out' or doing a soundcheck every day, I said, 'Let's rehearse these songs.' And then, at one point, somewhere on the road when we have two days off, we'll set up the next gig and record them all — record them live in a venue.' And I said, 'That would be unique. Nobody's ever done that. So let's do something nobody's ever done.'"

Alice went on to say that he has every confidence that the members of his current solo band — Tommy Henriksen (guitar),Nita Strauss (guitar),Ryan Roxie (guitar),Chuck Garric (bass) and Glen Sobel (drums) — will be able to rise to the occasion and make an album while on tour. "If you get the right players, you can do anything," he said. "I've got Nita Strauss in there. Nita is just a monster guitar player. She was voted 'Guitarist Of The Decade' magazine in Guitar magazine, and my drummer was voted 'Best Drummer In Rock' last year. And the great thing about this band is they never have a bad night; they're good every night. And they're all best friends. I never hear an argument; I never hear an ego pop up; I never hear anybody yelling at anybody unless it's funny. All I hear backstage is laughing."

Released last month, "Detroit Stories" was recorded with producer Bob Ezrin, mostly in Royal Oak with Detroit musicians and featuring a mix of original material alongside covers of songs by Bob Seger, the MC5, Mitch Ryder's DETROIT and OUTRAGEOUS CHERRY. It is the follow-up to 2017's "Paranormal", which marked Alice's first studio album in six years. Also produced by Ezrin, that effort featured collaborations with iconic guests such as ZZ TOP's Billy Gibbons, U2's Larry Mullen, Jr. and DEEP PURPLE's Roger Glover, as well Neal Smith, Dennis Dunaway and Michael Bruce — the three original Alice Cooper band members. A year later, Cooper issued "A Paranormal Evening At The Olympia Paris", a recording of his December 7, 2017 concert at the world-renowned Olympia venue in France. The effort captured Cooper and his current bandmates performing a choice selection of classic Cooper hits, in addition to some highlights from "Paranormal".

Alice later said that he wanted to release a document of his band's onstage prowess because they "deserved a live album."