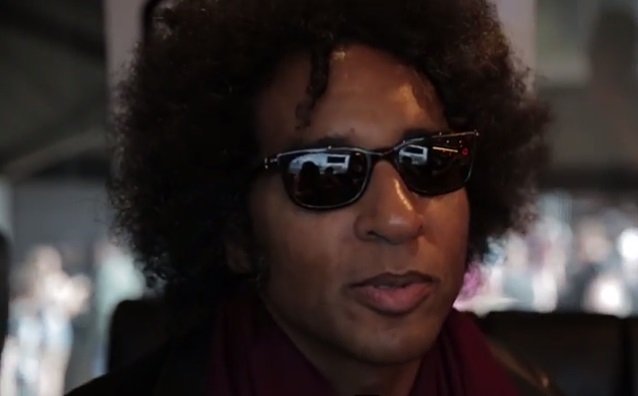 **UPDATE**: ALICE IN CHAINS' publicist has clarified to BLABBERMOUTH.NET that the incident described in Duvall's tweets took place "about five years ago. [William] was sharing a story/participating in the ongoing #AliveWhileBlack conversation that's taking place following Ferguson and the grand jury decision in the Eric Garner case. The experience he describes did not happen this week."

**UPDATE #2**: DuVall has posted the following explanation on his social media sites:

"First of all, let me express my heartfelt gratitude for the outpouring of support I've received from friends and strangers alike over the last 24 hours. I am truly humbled and deeply moved.

"By way of clarification, the incident I described took place several years ago. I was inspired to recount it after reading the many #AliveWhileBlack and #CrimingWhileWhite posts coming up on Twitter yesterday. In my view, those entries provide one of the most riveting illustrations of the dichotomy at the heart of America that I have ever seen. What really struck me is the fact that those stories flooding in by the thousands are merely a fraction of the millions more we will never hear. These are the 'small' stories, the 'everyday' stories, the ones so deeply woven into the fabric of our lives that they almost become mundane. And therein lies the true nature and scope of the problem.

"The fact is, I have many more incidents in my life like the one I shared yesterday. But I am doing far better than most. I just wanted to lend my voice to the growing chorus. Because what's most tragic and sobering to me about ALL of these stories — whether they fall into the more graphically horrific category of an Eric Garner, Tamir Rice, or Michael Brown or whether they are of the more 'mundane' variety like many of the ones currently being shared on Twitter, including my own — is that, almost without exception, any of them could have just as easily taken place 50 years ago.

"We have made tremendous strides as a nation, many of them in my own lifetime. I remain extremely proud of that. In the name of our ancestors who sacrificed so much to get us here and our children who will inherit this earth in our wake, we can't afford to idle and we can't fall back now. We have before us a golden opportunity to take yet another step forward. For all of our sakes, I sincerely hope we seize it."

ALICE IN CHAINS frontman William DuVall claims he was he was detained by police outside his own home, suggesting that race played a part in the incident. DuVall, who is African-American, tweeted on Thursday (December 4) that he was arriving at his residence in California when he was told by cops that he didn't live at that address. He wrote: "Detained pulling into own garage in W. Hollywood. Told 'You don't live here.' License SHOWS MY ADDRESS. Still held 30 mins. #AliveWhileBlack" In the comments section to his tweet, DuVall added, "That and much more happened to me. And I'm better off than most." The musician, who replaced the late Layne Staley in ALICE IN CHAINS, has not commented further on the situation as of this writing.

In an October 2013 interview with Noisey, ALICE IN CHAINS guitarist Jerry Cantrell discussed racist comments the band had received about the band having a black singer. "We've had a handful of people, a handful of unfortunate individuals who are friends of the band, who've made comments in that area," he said. "But we're a multiracial band, you know? [Mike] Inez [bass] is Filipino-American, William is African-American, Sean [Kinney, drums] and I are like American mutts. We're not exempt from the world we live in, and those are some things that William and Mike have probably dealt with more than Sean and I."

DuVall, who broke out on the Atlanta scene in the '80s with his band hardcore band called NEON CHRIST, left town soon after that band split up in 1986. He later told the Creative Loafing web site "Things got pretty heavy for NEON CHRIST and I bolted," Although he didn't witness it firsthand, he was told that a group of racist skinheads had set up a gun range in a warehouse near DuVall's old punk haunt the Metroplex. For target practice they were using pictures of his face.