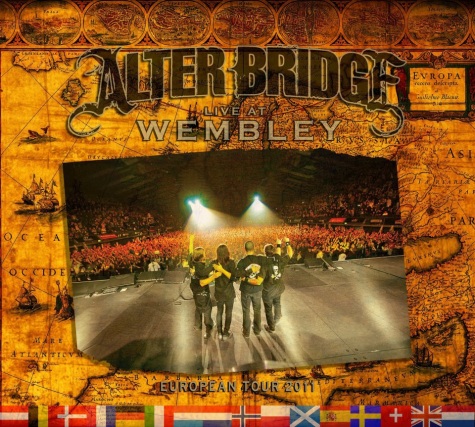 Hysteria TV conducted an interview with Brian Marshall and Scott Phillips of ALTER BRIDGE during this year's Soundwave Festival in Australia. You can now watch the chat below.

ALTER BRIDGE will release its new DVD, "Live At Wembley", at the end of March. The disc contains footage of one of the biggest headline shows of ALTER BRIDGE's career, which took place on November 29, 2011 at Wembley Arena in London, England. The 2D version (complete with a live CD) will be released everywhere this month while the 3D version will come out in the summer of 2012. Longtime ALTER BRIDGE director Daniel E Catullo III ("Live From Amsterdam", "One By One", "Isolation", webisodes, etc.) was brought in to direct "Live At Wembley" by The Dude Films, a new production and distribution company with offices in Laguna Beach, California and Maui, Hawaii headed up by "One By One" executive producer Stuart Margolis and executive producer Chris LaBabera. Lionel Pasamonte, who produced the band's last DVD, "Live From Amsterdam", is producing with Catullo.

In a new posting on ALTER BRIDGE's official web site, Catullo stated about the forthcoming DVD, "The worldwide release is now scheduled for all territories (U.S., Canada, Europe, Australia) for March 26, 2012. The U.S. and Canada moved to be in line with the rest of the world, rather than release on the 27th.

"In the U.S., the DVD will not be available at Target or Walmart. However, Best Buy and all other retailers will be carrying it. We are projecting that most of the retailers will sell out very quickly, as their initial orders are low. Therefore, the only way to guarantee you get your copy during release week is to order from Amazon.com or the EMI store. If you order on Amazon now, not only will you get an additional three bonus audio tracks, your product will be on your doorstep on release day.

"As we get more detailed release information, we will forward it on to you. We still do not have distribution set up in South America or Asia, but are diligently working on it."

ALTER BRIDGE's setlist for the Wembley show was as follows: