Swedish death metallers AMON AMARTH have completed work on their new album at Sphere Studios in North Hollywood, California with producer Jay Ruston, who has previously worked with ANTHRAX, STEEL PANTHER, URIAH HEEP and STONE SOUR. The as-yet-untitled disc is tentatively due this spring via Metal Blade Records.

AMON AMARTH vocalist Johan Hegg told Revolver magazine about the lyrical inspiration for the follow-up to 2016's "Jomsviking": "With the last record, I wrote a complete fucking movie script and we turned it into an album. This time around, I didn't have any of those ideas but we also didn't want to do a concept thing, either. 'Jomsviking' turned out so well, so if you then start working on another concept album and try to top that, it would almost be impossible — unless you have a really great story lined up that you can do that with. But I didn't, so it didn't make sense. I was a bit lazy on this one — I waited for the music to be done so I could see where it would take me."

According to Hegg, the only lyrical idea he had before the music was done was a song called "Berserker At Stamford Bridge".

"A friend of mine told me about the story and said I should write lyrics about it, which I thought was a great idea because it's such an awesome story," he said. " Basically, it's at the end of the Viking era. The Vikings are in England, and they've been very successful in beating the English, because what the Vikings did better than the English is that they moved fast and they moved during the night. But at the Battle of Stamford Bridge, the English used the Vikings' tactics against them, so they caught the Vikings by surprise. The Vikings were too far away from their supply ships, so they had to retreat. The Vikings were about 3000 men, and the English were 15,000. So they retreated over Stamford Bridge, but in order to halt the English army, they sent one guy with an ax out on the bridge."

Asked if there are any other songs based on specific events, Hegg said: "Not specific events, though 'The Shield Wall' is based on a real Viking battle tactic — but it's also about sticking together in the face of adversity. Then there's more introverted stuff, as well — songs that kind of relate to my private life, and I got the ideas for those songs from my wife. I got a lot of ideas from other people on this album, actually. I like working in metaphors, though. Mikael Stanne from DARK TRANQUILLITY told me that when he writes lyrics, he keeps them intentionally vague so that people can interpret the lyrics in a way that benefits them most. I like that, and I realized it's something I've done as well."

"Jomsviking" debuted at No. 19 on The Billboard 200 chart in March 2016. The disc was released via Metal Blade in North America and Sony Music internationally. The first concept record in AMON AMARTH's career was produced and mixed by Andy Sneap (JUDAS PRIEST, MEGADETH, TESTAMENT, ACCEPT). 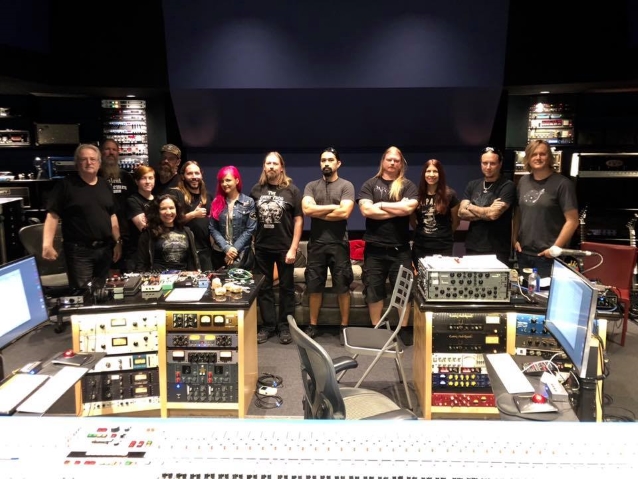