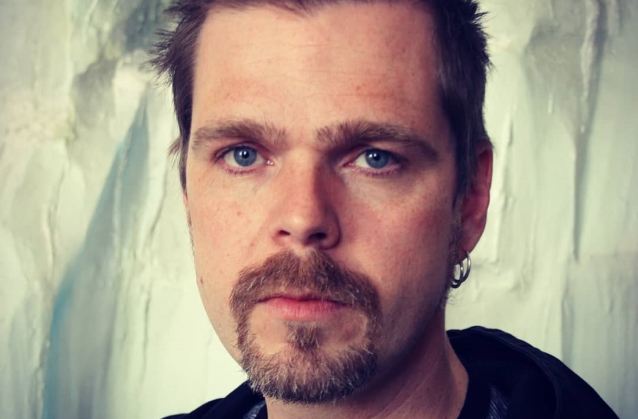 ANDREAS 'VINTERSORG' HEDLUND Steps Down As Lead Vocalist Of BORKNAGAR

Due to personal reasons, Andreas "Vintersorg" Hedlund has decided to exit the Norwegian epic black metal band BORKNAGAR. As a result, I.C.S Vortex will take over as the group's lead vocalist, and will, together with Lars Nedland, carry on BORKNAGAR's legacy of vocal brilliance.

According to BORKNAGAR, Hedlund's decision to leave "is based on mutual understanding, respect and in a friendly manner with the rest of the band.

"BORKNAGAR would like to express their sincere gratitude for the musical brotherhood we have shared throughout the years and wish Andreas the very best in his future endeavors," the group says.

"There is no drama to this situation, and our friendship will remain. No one should be too surprised if Vintersorg reappears as a guest vocalist on a future record."

BORKNAGAR founder and guitarist Øystein G. Brun comments: "It is with a lot of respect, gratitude and good memories I see one of my brothers in music set sails for new shores. Times are changing, and we both saw this coming for a while. Even though we are splitting as partners in BORKNAGAR, I am happy to say that we have decided to carry on our musical brotherhood in CRONIAN. A new album will be released whenever time allows for that."

Hedlund states: "Time has come to make some tough decisions and let reality set the rules.

"It is with both a light and heavy heart I leave BORKNAGAR as the lead vocalist. The light part is that it's done in an amicable way and that this is the right thing to do for me, in respect for the fans and BORKNAGAR. The heavy part is that it’s hard to leave something this meaningful and beautiful.

"My situation after the accident makes it hard to tour, and my job situation complicates things further. So in a way I'm not 'leaving' as such, it's more like I'm putting some oil into the BORKNAGAR machinery so the band can keep their busy schedule, get out on the road and meet you guys.

"BORKNAGAR will always have a special place in my heart and mind, and I hope that I can do some guest performances further down the road. The guys in the band are fantastic musicians and persons and I wish them the best of luck. However, CRONIAN is not dead and may shake its head before you know it."

BORKNAGAR is currently in the final stages of recording its eleventh album. It will be mixed and mastered this spring by Jens Bogren at Fascination Street Studio.

Back in November 2014, Hedlund was seriously injured when he fell head first on a concrete floor while moving some furniture. This resulted in multiple fractures to the skull, brain hemorrhage and momentary dysfunctional hearing in one ear.