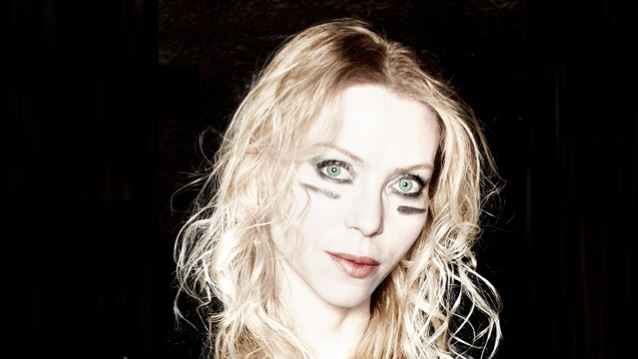 Angela Gossow says that she was "losing the joy" of fronting an extreme metal band before finally making the decision to quit ARCH ENEMY, explaining that she wanted to "step down rather than pretend."

After 13 years as ARCH ENEMY's vocalist, German-born Gossow shocked the heavy metal world in 2014 with the sudden announcement of her retirement from the band. While she is no longer performing with them, she has remained closely involved with ARCH ENEMY as their business manager.

"I took over management in 2008 already, after I noticed our previous manager was making a nice chunk of money, but we — the artist — did not at all," she told Roppongi Rocks about her move into artist management. "We hardly managed to get by. That couldn't be right. A lot of things changed for us since then. I think most managers take way too much out of the artist's pocket. Like 20% of the gross income, then they waste away what's left, no regards for the budget and the fact the artist should really make the most out of it. I've changed that. I take a lot less commission and I always make sure the artist makes more money than me at the end of the day!"

Asked how the dramatic changes in the revenue streams for non-mainstream musicians in recent years have affected the way she works with her artists from a business perspective, Gossow said: "Like I said, I think it's wrong to take too much commission. Also, there are markets you don't need to utilize a booking agent, but do it yourself. This way you save another 10% agent fee. It's all about planning ahead and avoiding extra costs. Book your flights early, make sure your passports and visas are issued in time.

"Artists make money touring — but if touring becomes too expensive or you have to cancel a tour due to missing paperwork, you are ruined. It's a manager's duty to keep a good cash flow, review label and publishing statements, make sure all shows, etc. are being paid for, know the places you need to get an advance, take no risk with work permits, hire good crew and organize everything well ahead of time.

"Losing money and having stressful moments is threatening for a band's existence. Be on top, sober and alert. Know what you are doing. Numbers don't lie."

About her decision to step down as ARCH ENEMY's singer, Gossow said simply: "There's a time and place for everything. I started out in 1991. I was simply losing the joy to be doing this, living a life on the road. So I decided to step down rather than pretending."

"I took notice of [Alissa] a couple of years ago [after] she came to an ARCH ENEMY show in Montreal and told me 'Wages Of Sin' was her reason to get into growling," Angela said. "I checked out her stuff [with her previous band THE AGONIST and] I was really impressed. When I started to think about my future and the future of the band, I decided to approach her. There's not many out there who'd be up for that task, it's easy to throw some clips on YouTube and pretend to be serious. But the real game is much tougher. You'll be out there performing no matter how you feel, you got a responsibility. You need to step it up big time to become a professional touring and recording musician. You need discipline, health and talent. She's got it all."

ARCH ENEMY is currently working on material for the follow-up to its latest album, "War Eternal", tentatively due in 2017.