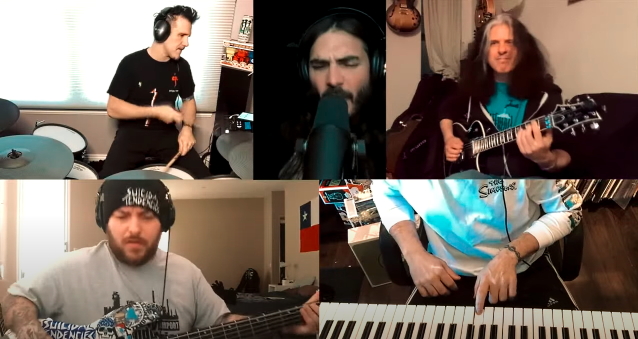 Charlie Benante (ANTHRAX),Alex Skolnick (TESTAMENT) and Roberto "Ra" Diaz (SUICIDAL TENDENCIES) have shared their version of another classic RUSH song, "Freewill", recorded with each member separated in their own homes.

Benante uploaded a video of the performance to his YouTube channel, writing in an accompanying message: "Dear friends: Once again, the three of us (Alex , Ra and myself) were completely knocked out by the responses to our latest video. As if your appreciation of the music wasn't enough, it's been humbling to hear from so many of you who've let us know how much this has been helping during this difficult period of quarantine and isolation. This brings us to the following conclusion: 'We can't stop now, can we?'

"Here is our follow up: 'Freewill'. 'Freewill' is about thinking for yourself, accepting difficult truths and avoiding superstition, magical thinking and herd mentality (most pertinent during these times). We now have a @rush trilogy. When we 'made a choice' (as the song says) to take on this tune, we had a new challenge on our hands: Our previous two ('YYZ' and 'La Villa Strangiato') are both instrumental and doing this one would require a vocalist who is up to the task (sadly that excludes the three of us). Fortunately, we know just the guy. On vocals, we proudly present Brandon Yeagley @brandoncrobot of @crobotband

"In addition to Neil Peart (the great RUSH drummer and composer of these lyrics, whom we lost in January),this song is dedicated to John Horton Conway, genius mathematician who recently left us due to Covid-19, whose influence extended beyond mathematical circles, including artists (such as musician/producer Brian Eno),software developers, game makers etc and whose achievements include a personal favorite entitled 'Free Will Theorem'.

"Special thanks to @blechugag for assisting with this audio mix and once again, @pieromedone who makes the video magic happen.