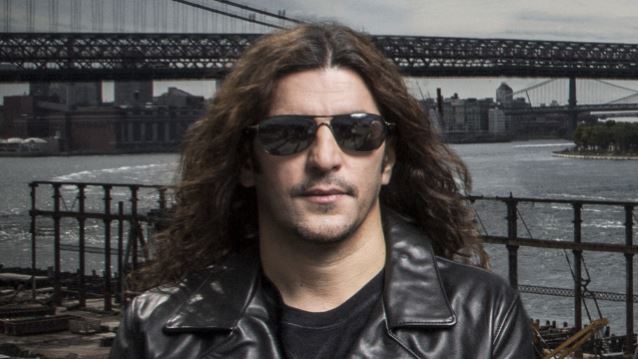 ANTHRAX's FRANK BELLO On SLAYER's Decision To Call It Quits: 'They've Been Talking About That For Quite A While'

ANTHRAX bassist Frank Bello says that the members of SLAYER have been talking for a while about calling it quits.

Last month, SLAYER, one of metal's most popular and influential bands of the past four decades, announced its "final world tour" via a 30-second video. The group also confirmed that its last-ever North American run of dates would feature support from LAMB OF GOD, ANTHRAX, BEHEMOTH and TESTAMENT.

In an interview with RadioactiveMike Z, Bello was asked how felt about SLAYER pulling the plug on an impressive three-and-a-half-decade career.

"It's been happening for a while," he said (hear audio below). "I know these guys pretty well; they're good friends of mine, specifically Kerry [King, guitar]. And they've been talking about that for quite a while. And I'm actually surprised that it came now, [and] I'm kind of bummed, but, you know, SLAYER will never die, at the end of the day. So maybe they'll do one-off shows and stuff like that."

Bello went on to say that he understands why SLAYER would want to retire from touring after spending so many years on the road.

"This touring stuff, it's pretty grueling," he said. "As much as people think it's like a dream [job], the best part about it is the show. The rest of it, the traveling… And, thankfully, we have buses and all this nice stuff. But being away from you family — we all have families — being away from your family, all that stuff comes into play. And the wear and tear — it's not as easy as it used to be, but I understand it. But I'm not ready yet to pack it in, 'cause I genuinely enjoy this. So it's hard on the family, it's hard on your body, but it is what it is, and I'm having a good time doing it."

Frank said that he will "miss SLAYER," because he loves touring with the Tom Araya-fronted outfit, but he added that he is looking forward to doing one more run with his friends.

"ANTHRAX and SLAYER have done a lot of tours together," he said. "There's nothing better for me than to send these guys off, and being there, just hanging with them. I don't know even know what's gonna be crazier — the backstage or the shows. It's a really good time. That's a traveling circus. That's gonna be a lot of fun."

"Look, it's not up to me," he said. "It's obviously up to METALLICA. All four bands, or at least the three of us, would love to do another 'Big Four,' but it's really up to METALLICA, of course. But if they wanna do it, they're the biggest in the world, and we'd love it. METALLICA are great, we're all good friends, and if it's time to do that, then great. Of course I'd love to do that."

Asked whether he thinks ANTHRAX will one day call it a day with a farewell tour, just like SLAYER is doing right now, Bello said: "Hopefully that won't be for a while. I think we're writing the best music we've written so far, so I'm happy. I wanna see what comes out of us next. I love playing, and I think there's a whole new fanbase that's coming to ANTHRAX [shows] right now, which is nice — it's really great to see it grow every year and every record cycle. So there's a whole new generation [of fans]. And from the beginning of the 'Big Four' [shows], I think that opened up a lot of people to ANTHRAX. Maybe they heard of ANTHRAX and maybe they never heard ANTHRAX, and now they've heard and seen ANTHRAX live, and it's nice to see. So we're ready to go."

ANTHRAX will release its long-awaited live-in-concert DVD, "Kings Among Scotland", on April 27 via Megaforce. The DVD is preceded by ANTHRAX's North American co-headline tour with KILLSWITCH ENGAGE — "KillThrax 2018" — which kicked off January 25 in Montreal.