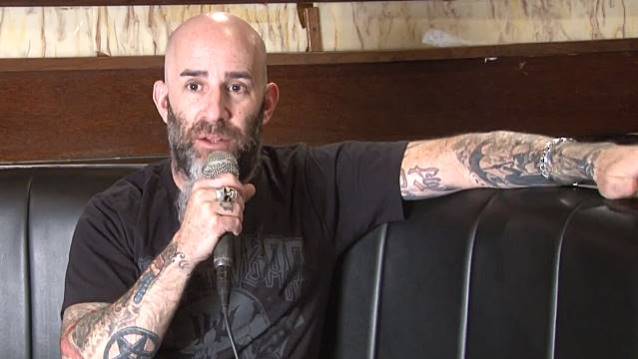 ANTHRAX guitarist Scott Ian recently spoke to Artisan News about his current "Speaking Words" spoken-word tour. You can watch the report below.

Speaking about what made him decide to do a spoken-word tour, Ian told The Aquarian Weekly: "Well, when [punk rock icon Henry Rollins] first started doing it in the early '90s or whenever he started doing it, he was definitely relating a lot of road stories, and he wrote that book 'Get In The Van'. Some of the shows that I saw back then, it was definitely kind of like that' where he's just up there telling stories. He hadn't really gotten political yet, but over the years, his show has changed and grown. Mine is just starting. So, I'm basically just coming from a place that I feel real comfortable with and there are a lot of these stories that I do tell are stories that I've sat around in bars with my friends over the years. I would go, 'Oh my God, you're not going to believe this…' Then I would tell the story and it never failed, we'd be cracking up. It was just something that in the back of my mind, I always felt I could do. I just really didn't know how.

"I certainly wasn't being proactive about it. It's not like I was out there looking to go do these dates. I'm not the type of guy looking for reasons to travel anymore. I'm busy enough with ANTHRAX that I don't need something else to take me away from my wife and my son. It would have to be something that I was obviously really, really enjoying in a different way and it has to be something that was fulfilling me in a different way than I already have with my band.

"So, I did a one-off in London a couple of years ago. I got offered to do it and they asked me to come over and do a solo show. I thought they meant come with my guitar and sing and I was like, 'I don't do that!' And they were like, 'No, stupid. It's a speaking show! Just come and tell stories.' I thought, 'Oh, well, that I can do.' I really didn't give it much thought. I figured I can do that, so I said yes because I had like five months to prepare for it.

"I had this big grand plan that I was going to be super professional about it and write my show and invite some of my comedian friends over to watch me do my show at my house and they can give me notes on it and help me put together this perfectly crafted talking show. And I didn't do any of that. I spent five months not even thinking about it until the night before the gig, where I really had no idea what I was gonna do. [Laughs] I was gonna call my agent and tell him I had the flu and to cancel the show. Because, really, it was, like, who cares? It's 200 people in a club. It's not like we're canceling some big rock show and whatever. People will get on with their lives. My wife, Pearl, pretty much just said, 'That's beat. There's no reason for you to cancel. You know what you're doing. These stories are a part of you. All you have to do is go in there like you're hanging out with your friends in a bar and tell stories.' That's kind of all the advice I needed. It just really calmed me down. It got me on stage the next night. And then cut to two hours later at the end of the show, I'm in the dressing room asking my agent how do I do more of this because I had so much fun doing it. And that's how that snowballed into a full tour in the U.K., a show in Germany, and a couple shows in Australia. Now, I get to bring it back home and do it in the States and Canada."

Asked if it shocks him that he was asked to do a spoken-word show, Ian said: "I don't know if shock is the right word, but I was definitely flattered that someone was willing to take a chance on me. Take a risk on something that's really not what I'm known for and it's not what I do. Someone thought that I had enough of a point of view and the ability to actually get on stage and entertain people who are paying money to come and see me. That takes a lot of faith and trust. It's not like I had some kind of a DVD out already where people can see what it was. I didn't even know what it was until I started doing it. And then I really learned how to do it. Just by being on tour and doing show after show. I really learned how to do this by doing it. I talked to a lot of my stand-up comedian friends, who all said the same thing: 'The only way to learn it is to do it in front of people, and that's how you get better at it.' And it's still fun for me to do. I still look forward to it because there are so many unknowns about it to me. It's something I'm obviously learning as I go. So I'm excited about these shows because it's only gonna get better."