APOCALYPTICA will return to the U.S. this summer/fall.

The Finnish cello rockers, who are currently in the middle of a North American tour with LACUNA COIL, have announced a new batch of dates for September and October 2022 with support from LEPROUS and WHEEL.

Earlier today (Monday, April 25),APOCALYPTICA said in a statement: "Surprise! This tour has gone so well that we are coming back out to North America next September with our friends in LEPROUS and WHEEL! Of course, singing for APOCALYPTICA will once more be our dear friend Franky Perez!

"Our exclusive artist presale launches tomorrow at 10AM local time (of each venue) and runs til 10pm local time on the 28th. You can access it with the code: CELL0 (Note, that's the number zero, not the letter 'O').

"We're so excited for this!

"See you out there!"

Earlier this month, APOCALYPTICA's Eicca Toppinen spoke to Mexico's Summa Inferno about his band's plans for a follow-up to 2020's "Cell-0" LP. He said: "We have started to talk about the next possible album. But in the meanwhile, we've been recording individual songs so we could release something constantly. So now we have already [planned out the] three next releases after [the recent single] 'I'll Get Through It'. We're gonna have something for the later [part] of the year as well; we're gonna have something for the winter. So we are working on different fields — on the instrumental field, on some special fields and then also on the vocal field.

"I would guess we'll start to write for the new album," he continued. "We've been starting to talk about what it could be, what would be exciting to do for us, but [those discussions have] not [gone] very far yet. Because the mindset is now we're doing the 'Cell-0' tour. And it's not that easy at the same time to get very high inspiration and motivation to write a new album, because writing a new album and recording it is a huge process; it takes a lot of time [and] a lot of energy. So, now we have so much touring that it's not possible to do it now. But I think we [will be] starting on it [soon]."

Released last month, "I'll Get Through It" was written for APOCALYPTICA by American award-winning songwriter Diane Warren. It features Franky Perez — guest vocalist in APOCALYPTICA's 2015 record "Shadowmaker" — as well as Geezer Butler of BLACK SABBATH on bass guitar.

"Franky and I were visiting my friend, Diane Warren, at her studio," commented Geezer. "She played us this song, saying that she thought it would work well with Franky's voice. He gave it a try on the spot. We loved it. Franky then suggested sending it to APOCALYPTICA. They loved it, and the rest is history."

"I'll Get Through It" marks the first collaboration between APOCALYPTICA and Perez since he sang on "Shadowmaker", which adds to the excitement for the members of APOCALYPTICA, according to Perttu Kivilaakso. "We are more than thrilled working with our great and talented friend Franky Perez again!" he said. "It's been a while since our previous collaborations in 'Shadowmaker' album and tour, and we are also highly awaiting for getting back on road with him this April all across the States!"

Perttu also added about the song: "'I'll Get Through It' is a meaningful and beautiful song by an incredible songwriter Diane Warren, with whom we've also had the pleasure of working with before. We can't wait for you to hear the final result… falling in love again with Franky's sensual performance, Geezer's earthshakingly powerful bass, and our wistfully haunting cellos, among the inevitable presence of all the rhythms and groove!

"We hope you'll enjoy the track as much as we do! Gonna be a blast performing it also live!"

Prior to enlisting Perez, who is accompanying APOCALYPTICA on the band's 2022 North American tour, the group released eight albums that melded the classically trained cello mastery of the three core bandmembers with the harder elements of the rock world, including drums and guest vocalists, such as Gavin Rossdale from BUSH, and Corey Taylor of SLIPKNOT and STONE SOUR fame.

Back in 2018, Toppinen stated about APOCALYPTICA's decision to make an all-instrumental album at this point in the group's career: "On the previous ones, we always combined the instrumental songs with the vocal songs, and it was great to have the featuring artists, it was great to work with Frank Perez for the 'Shadowmaker' album. But then, on the other hand, it became a bigger interest for us, like, okay, it would be interesting to make a full instrumental album, so there's no compromise with anything." 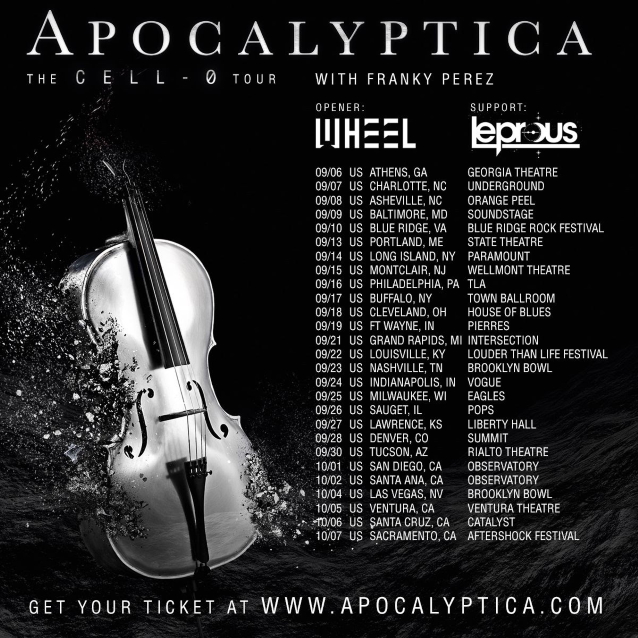