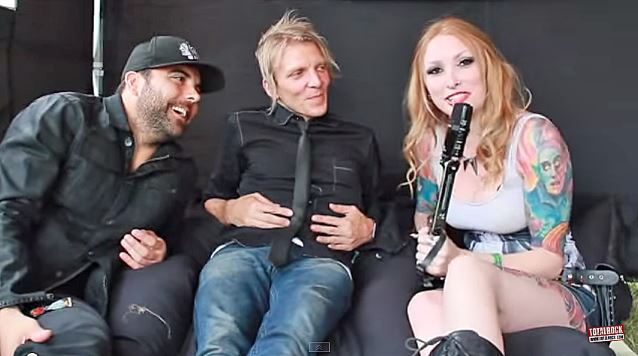 Hayley Leggs of TotalRock Radio conducted an interview with APOCALYPTICA's Franky Perez and Mikko Sirén at the 2015 edition of the U.K.'s Download festival, which was held last weekend in Donington Park. You can now watch the chat below.

Asked how APOCALYPTICA ended up hiring Franky Perez to handle the vocals on the entire "Shadowmaker" record, APOCALYPTICA's Eicca Toppinen told Australia's The Rockpit: "It was actually the beginning of June last year when we made the decision to, 'Okay, there's no more guest vocalists on this record. We need to find a guy who makes the record and will tour with us for the record. It's like a puzzle where all the pieces of the puzzle are spread all over, they are not connected, and we need to get those pieces connected. And ways to have one singer to make the whole thing more understandable for people, to make the working circumstances more comfortable for us where things are not so dependant on people outside of the band — the guests, the managers and the label — so it's all about us."