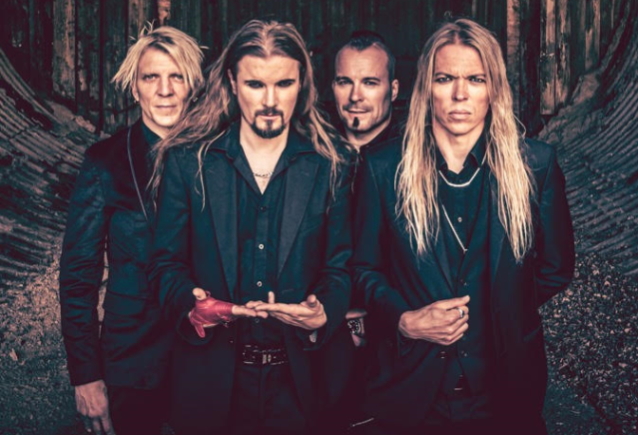 Eicca Toppinen of Finnish cello rockers APOCALYPTICA spoke to Knotfest at this year's Louder Than Life festival about when fans can expect to hear a new full-length album from the band. He said (as transcribed by BLABBERMOUTH.NET): "That's very hard to tell, because now we just released this EP ['Metal Classic, Classic Metal', featuring cello-metal reinterpretations of classical bangers]. Probably in December or January — I can't recall the date — there's gonna be the next song; it's a vocal feature. I can't reveal what it is yet. But that's gonna be out then. And there's gonna be other singles released next year. I would guess the next album is not gonna be before '24 — a full album."

He continued: "We are kind of following different paths, because the digital world gives you the possibility that it's not the old-school way that you release an album and then you tour for two or three years and then you make a new album. It's not like that. The modern world requires, in a way, to deliver something new and fresh pretty much constantly. And we have this classical covers world, then we have the original instrument APOCALYPTICA world, and then we have the vocal world of APOCALYPTICA. We have kind of three tracks we are [following]. At the same time when we are working on a new album, we are also working… Because an album is always a little bit more like a concept — it's one type of full structure of an idea — and we don't want to stick only on that. Even [while] we go for this one album structure, we want to keep these both other paths alive at the same time. So that's why it's very hard to say exactly what's gonna happen in which order."

Seven months ago, Eicca told Mexico's Summa Inferno about his band's plans for a follow-up to 2020's "Cell-0" LP: "We have started to talk about the next possible album. But in the meanwhile, we've been recording individual songs so we could release something constantly…. I would guess we'll start to write for the new album. We've been starting to talk about what it could be, what would be exciting to do for us, but [those discussions have] not [gone] very far yet. Because the mindset is now we're doing the 'Cell-0' tour. And it's not that easy at the same time to get very high inspiration and motivation to write a new album, because writing a new album and recording it is a huge process; it takes a lot of time [and] a lot of energy. So, now we have so much touring that it's not possible to do it now. But I think we [will be] starting on it [soon]."

This past March, APOCALYPTICA released the "I'll Get Through It" single, which was written for the band by American award-winning songwriter Diane Warren. It features Franky Perez — guest vocalist in APOCALYPTICA's 2015 record "Shadowmaker" — as well as Geezer Butler of BLACK SABBATH on bass guitar. The song was born out of a visit Geezer and Franky paid to their friend Diane, who had already written the track "Not Strong Enough" for APOCALYPTICA, included in their 2010 record "7th Symphony".

Prior to enlisting Perez, who accompanied APOCALYPTICA on the band's 2022 North American tour, the group released eight albums that melded the classically trained cello mastery of the three core bandmembers with the harder elements of the rock world, including drums and guest vocalists, such as Gavin Rossdale from BUSH, and Corey Taylor of SLIPKNOT and STONE SOUR fame.