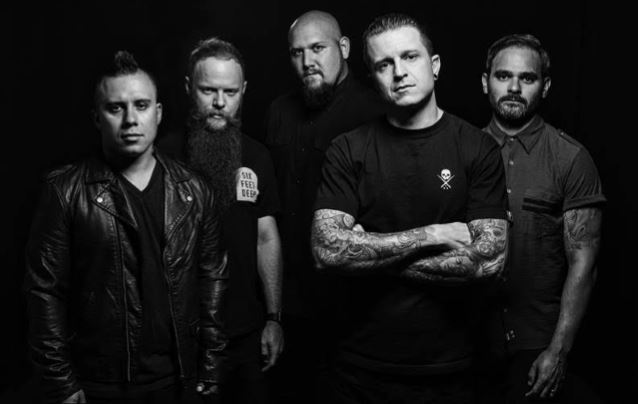 "A Bitter Broken Memory", the new video from the popular California rock band ATREYU, can be seen below. The clip is a compilation of various footage of the live gigs that ATREYU has been playing in the past year since the launch of the band's sixth album, "Long Live".

Commented ATREYU drummer/vocalist Brandon Saller: "This video essentially shows a bit of the journey that 'Long Live' has had so far. From being in the studio to playing club shows to playing in stadiums. We wanted to give our fans a little view of what we’ve been doing for the last year and what this record has done for us."

"Long Live" was released in September 2015 through the Search And Destroy imprint as part of the newly announced joint venture between Raw Power Management and Spinefarm.

Asked why ATREYU decided to come back now after a four-year hiatus, guitarist Dan Jacobs told Already Heard: "It just felt right! I think it was a matter of everybody being on board at the same time. We'd gotten interest from a couple of guys here and there, but not everyone, then it would go back the other way. Some people would be interested, but not the other people and it was just, like, 'Ugh, come on, guys! Just get everybody on the same page!' I think everything happens for a reason, though. I feel like this is the best time for us to come back. We unintentionally starved the market, which is the best thing we could've done. We were really burnt out — even our fanbase was burnt out because we were touring so much; we were so accessible. By starving the market and stepping back for a bit, people are kind of, like, 'Are they gone forever? Are they ever coming back?' Everybody wants what they can't have, you know? So if you take something away from somebody, then they start getting all excited and talking about it, so it worked in our favor; it's helped launch us back into the scene."