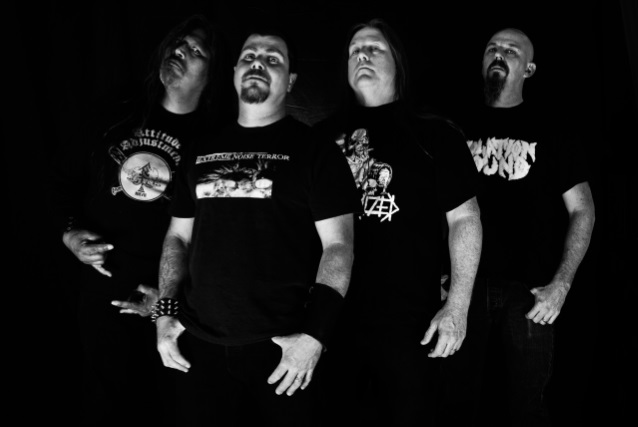 The release will be available exclusively through the Peaceville store on CD, LP and digitally (with all pre-orders receiving the title track as an instant download).

With the returning lineup of Chris Reifert, Eric Cutler, Danny Coralles and Joe Trevisano, AUTOPSY once more delivers a rancid concoction of slow brooding doom and high-octane metal madness injected with twisted solos and an overdose of vocal insanity.

Of the thirtieth anniversary of AUTOPSY, Reifert comments: "Thirty years of AUTOPSY... how the hell did that happen? Seems like just yesterday but somehow a million years ago that a couple of degenerate teenagers formed this beast that still lumbers and lurches around the confines of the studio and the expanse of the world itself. It's hard for us to believe too. Just don't think we're letting you out of the audio noose yet... we still have some of our sickest tricks up our sleeves for your horrific pleasure!"

One of the early breed of U.S. death metal acts, AUTOPSY formed in 1987 in San Francisco and released four albums on Peaceville — beginning with the classic debut, "Severed Survival", in 1989 — before disbanding in 1995, with members going on to form ABSCESS. AUTOPSY triumphantly and officially returned from the grave after a fifteen-year hiatus with the 2010 EP "The Tomb Within". This was followed by the release of the band's fifth studio album, "Macabre Eternal", in 2011, to great acclaim, and the band has subsequently remained at the top of the death metal pile since. The full legacy of AUTOPSY was also recently extensively documented in the book/set "After The Cutting".

In addition to the mini album, there is a special treat for fans of the grotesque: as part of the ongoing seven-inch series marking thirty years of Peaceville comes a new vile treat in the form of a double feature from two titans of death metal — AUTOPSY have teamed up with the Sweden’s kings of gore BLOODBATH to create a limited-edition split seven-inch.

AUTOPSY presents a high-octane version of the none-too-subtly titled "Fuck You!!!", originally known from '80s West Oakland act BLOODBATH (which once featured current AUTOPSY guitarist Danny Coralles). BLOODBATH U.S. was a large inspiration for AUTOPSY in their formative years, and the track is presented here in an exclusive alternate version to that featured on "Puncturing The Grotesque".

BLOODBATH brings us its own nod to the past and inspirations, in the form of a relentless rendition of the CANCER classic "Blood Bath", recorded specially for this release, and giving a clear indication as to where the seeds of their own path to masterful brutality were sown.

AUTOPSY comments: "'Fuck You!!!' is a cover song of a cover song.... and the only song we've ever considered covering. Eric and I loved the version that Danny's old band BLOODBATH did before we even knew Danny, let alone knowing that he'd end up joining AUTOPSY. And Danny didn't even know it was a cover song at the time! Got it? It's a crazy world and a crazy song. It's also a cool tribute to Dane Petersen (R.I.P.),the original BLOODBATH vocalist. We feel we gave it the treatment it deserved... now it's up to you to crank it up and hold those middle fingers high!"

BLOODBATH says: "Most of you would know this already, but for those of you who don’t, it was the title of the first song, on the first album by U.K. death metallers CANCER, which we originally lifted our band name from. Now with Peaceville celebrating its thirtieth anniversary, there would be no better token than offering this cover song to glorify the old-school, brutal and trashy death metal legacy of CANCER fucking CANCER, once more! And as if it couldn't get any better, we've the honor to split these seven inches with gore legends AUTOPSY who also bathe in their own blood!" 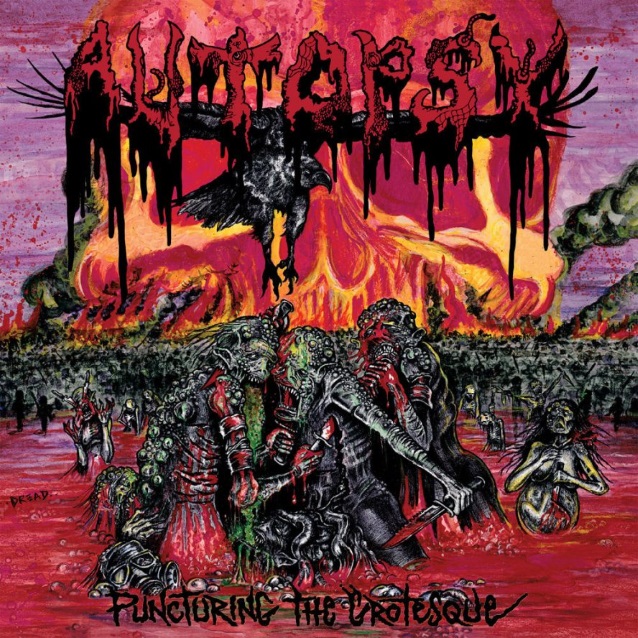