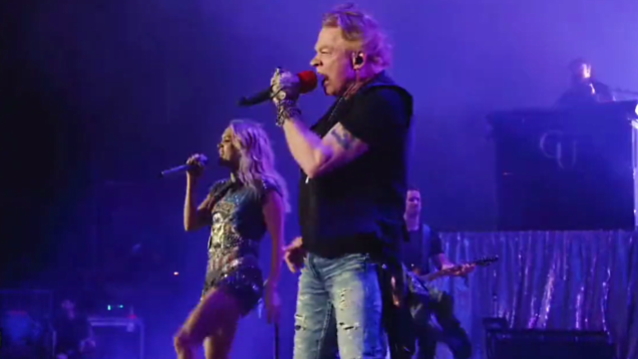 AXL ROSE On His Performance With CARRIE UNDERWOOD: 'A Great Fn Night!'

Carrie performed the opening verse and chorus of "Sweet Child O' Mine" with her band before telling the crowd: "Welcome to the greatest night of my life. Give it up for Axl Rose!" They then immediately launched into "Paradise City", with Underwood telling the audience: "You thought we were finished?"

Earlier today (Monday, May 2),Axl shared a few backstage photos of him and Underwood from Stagecoach, and he wrote in an accompanying message: "A great Fn night!"

When Carrie first tweeted about her performance with Axl on Sunday, she wrote: "Best. Night. Of. My. Life!!! I am still freaking out!!! Thank you, @axlrose , for making this lifelong dream come true!!! You rocked that @Stagecoach stage harder than anyone has ever rocked it before! #SweetChildOMine #ParadiseCity #AxlRose…"

Best. Night. Of. My. Life!!! I am still freaking out!!! Thank you, @axlrose, for making this lifelong dream come true!!! You rocked that @Stagecoach stage harder than anyone has ever rocked it before! ❤️🔥❤️🔥❤️🔥 #SweetChildOMine#ParadiseCity#AxlRose… https://t.co/Z91QtDQ6OIpic.twitter.com/vQnAJJMFPn