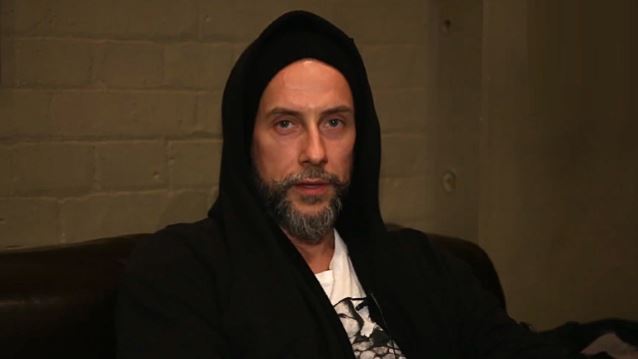 BEHEMOTH's NERGAL Is Not Thinking About Follow-Up To 'The Satanist'

Nev Pearce of Australia's "Rabid Noise" podcast recently conducted an interview with guitarist/vocalist Adam "Nergal" Darski of Polish extreme metallers BEHEMOTH. You can now listen to the chat in the YouTube clip below. A couple of excerpts follow (transcribed by BLABBERMOUTH.NET).

"I think we definitely came out of the box with this one. We left our comfort zone, trying to… I mean, don't get me wrong — [2009's] 'Evangelion' was a great record, but if we followed that direction and tried to sound even more perfect… To me, 'Evangelion' sounds super proper — it's very modern production, and it's a well-played, well-crafted record. And I'd say, most of the bands would just try to perfect that and go even further, and sound maybe heavier or try to sound faster and this and that. And we just took a completely different alley, we just took a different direction [with 'The Satanist']. It was pretty unexpected, I guess, and it was kind of risky for us, and it was very challenging. Right after the record was done, I was immediately in love with record, and I still am — I'm very happy with the album — but I was honest with everyone I talked to. I [said], 'I honestly don't know what the people's reaction is going to be to this record,' because it's pretty different. It's mostly midtempo, the production is maybe not what people expected. And I really had doubts. But one thing that I was a hundred percent sure was that this a hundred percent me, and I still stood behind the record all the way. And then, all of a sudden, people — both media and fans; pretty much everyone — [who] listened to the album, they loved it right away. I mean, it's unheard of… artistic-wise, people consider this the best BEHEMOTH album and yet the record was successful commercially as well, and the media loved it. So I have no reason to complain whatsoever."

On BEHEMOTH's plans for the follow-up to "The Satanist":

"Well, I don't really think about following it up yet. I have to change my way of thinking. I focus on the present moment — on here and now — and just make we squeeze the fuck out of this album, all the juices, and make sure all the touring [is completed successfully]. We have this attitude that we want people to have this impression that it's the last time we play on stage. When you see us live, it's now or never, if you know what I mean. So I'm not like… I used to be like that… I'd go into the studio and spit out the record, and the record… Name any record, it's been every time I did that. And I was already thinking of the next one, because I knew that I'm gonna top myself, and I really attempted that every time. But I was never satisfied. And this time, it's quite the opposite. So this is it — this is the ultimate BEHEMOTH album — and there's no plans to record the next one yet. So what we focus on, we focus on the quality of the touring for 'The Satanist', and let's see what the future brings after that."

The definitive BEHEMOTH biography, "Behemoth: Devil's Conquistadors" by Lukasz Dunaj, was released in February via Metal Blade. The 490-page, hardcover tome includes quotes and anecdotes from current and former members that provide context and details in addition to the author's narrative, plus interviews with Tomas Krajewski, Rob Darken, Graal, Havok, and more. The artistically presented pages are splattered with old photos of the band, flyers, lyric sheets, etc.