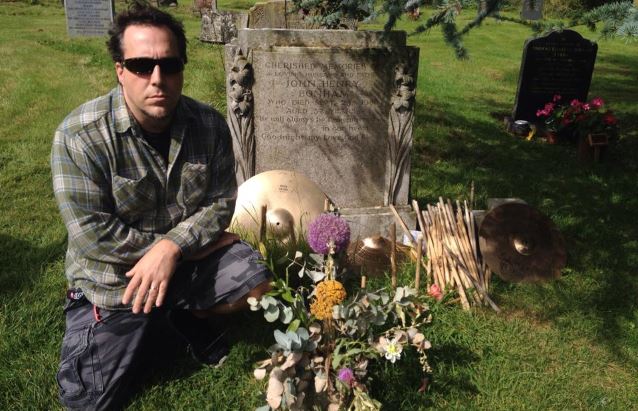 Mick Burgess of Metal Express Radio conducted an interview with BIOHAZARD drummer Danny Schuler on July 6 in Newcastle, England. You can now listen to the chat using the audio player below. A few excerpts follow (transcribed by BLABBERMOUTH.NET).

On BIOHAZARD's forthcoming follow-up to 2012's "Reborn In Defiance" album:

"We've got a bunch of songs, and we're still working on it. We should be getting it done pretty soon, I think."

On where BIOHAZARD gets inspiration for new songs:

"Scott's great. He likes to get to work and actually be a part of it, which is nice, 'cause it didn't use to be like that. It's great having Scott as a part of the band. He's really come into his own. It's difficult for him to do what he does… in the eyes of a lot of people, it's very difficult. It's a hard job. But he does a great job."

On how the music business has changed since BIOHAZARD started in the late 1980s:

"I think the bands have an opportunity now to take back the business from those that they think haven't done a good job promoting their music or whatever. You know, a partnership with a record company to physically produce the music and distribute it can be a good idea if you can make it work. I'm not anti-record company, but the way the music business now is, it's very difficult to make money selling records, [because] people don't buy 'em anymore. Which is crazy to me, because I never stopped buying records — I've always bought records — and now I just buy 'em… you know, I buy MP3s and I have it on my iPod. I mean, I still buy all my music. I couldn't imagine how… I don't understand how people could just steal music. I just don't do that. I don't know… Like, a band like LED ZEPPELIN doesn't need the money, but if they put something out, like they did recently, I buy it. You know, I buy. You support the bands. I also like the convenience of just having it on my iPod. But, like, my friends' bands, I buy every one of 'em. If I wanna support them and hear their music, I don't ask for a free copy. I go buy it. I don't understand that whole thing — how you can justify stealing music."