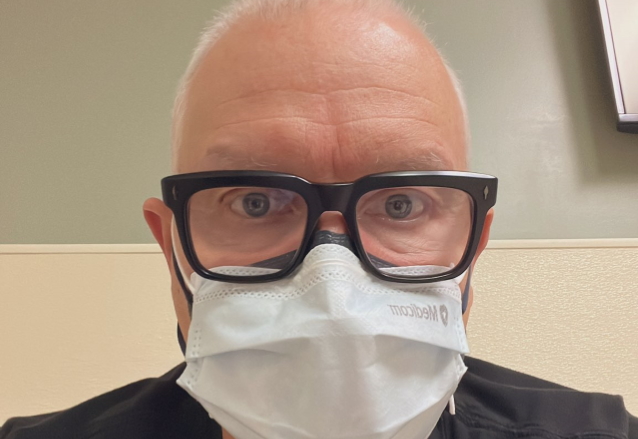 BLINK-182's MARK HOPPUS Is Having His Chemo Port Removed

BLINK-182 singer and bassist Mark Hoppus is undergoing a surgery to remove his chemo port, a device that provided chemotherapy treatments during his battle with cancer.

According to Medical News Today, a chemo port is a small, implantable device that attaches to a vein. Doctors typically insert these devices beneath the skin in the chest. They reduce the need for doctors to keep finding a vein to deliver medications, take blood samples, or carry out other procedures.

Earlier today, Hoppus took to his social media to share a photo of him at a doctor's office, and he included the following message: "In the waiting room for the surgery to remove my chemo port!"

Three months ago, Hoppus confirmed that he was battling a blood disorder called stage 4-A diffuse large B-cell lymphoma, the same type of cancer his mother previously beat. Hoppus completed chemotherapy treatment last month and he said that his oncologist told him he was now "cancer free".

In the waiting room for the surgery to remove my chemo port! pic.twitter.com/6PVyC4NEcZ