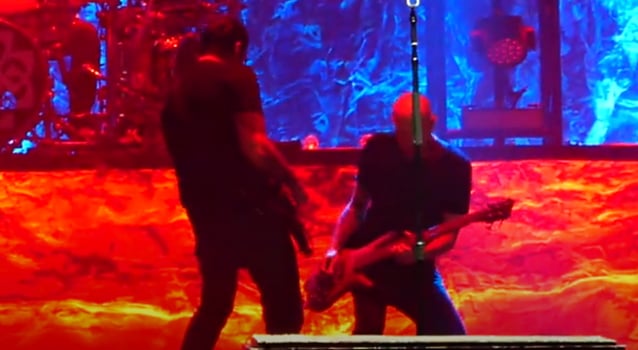 BREAKING BENJAMIN was rejoined by former bassist Mark Klepaski on stage during the band's concert last night (Saturday, September 18) at the Pavilion at Montage Mountain in Scranton, Pennsylvania to perform the song "Firefly".

Prior to launching into the track, BREAKING BENJAMIN frontman Benjamin Burnley addressed the audience, telling them: "I want you guys to fill up your lungs and give a nice, nice, nice 'welcome home' warm welcome to a very special guest tonight. This is our friend for many, many years, Mark Klepaski. Mark played bass on 'Saturate' [2002], 'We Are Not Alone' [2004], 'Phobia' [2006] and 'Dear Agony' [2009]. We've known each other for so long. 20 years. I love you.

"You guys wanna hear Mark play bass on one of our songs?" he added. "You were there for this one when we recorded it. He actually is playing bass on this song on the record. And Aaron's [Bruch, current BREAKING BENJAMIN bassist/backing vocalist] gonna sing it, so make some noise for Aaron. Aaron Bruch, everybody. We wanna hear you guys singing along. Are you ready?"

According to Billboard, Klepaski and guitarist Aaron Fincke were fired by Burnley in 2011. They were dismissed from the group after allegedly giving permission for a remixed version of the song "Blow Me Away" to appear on the group's 2011 greatest-hits album, "Shallow Bay: The Best Of Breaking Benjamin". At the time, Burnley claimed that Klepaski and Fincke were offered $100,000 by the band's label to approve the revised version of the song, and that they did not inform him or the band's management of the remix. The legal dispite effectively ended this era of the band. Once the legal matters were settled, Burnley reformed BREAKING BENJAMIN with a new lineup in 2014.

BREAKING BENJAMIN's last collection of all-new material, "Ember", debuted at No. 3 on the Billboard 200 and marked the multiplatinum band's fourth Top 5 debut on the Billboard Top 200, following 2015's No. 1 debut for "Dark Before Dawn" (certified gold),"Dear Agony" (platinum) at No. 4 and "Phobia" (platinum) at No. 2. "Ember" spun off two No. 1 hits at Active Rock radio with "Red Cold River" and "Torn In Two".