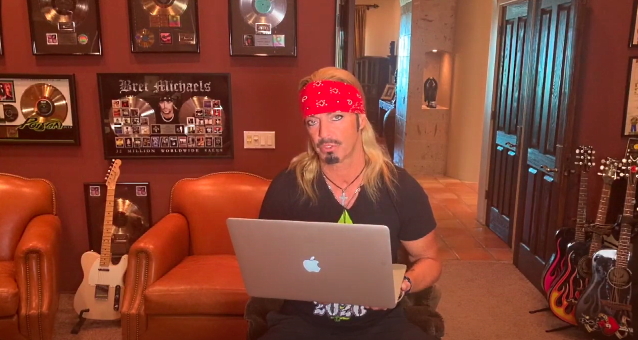 Video of POISON singer Bret Michaels reading from his recently released book, titled "Bret Michaels: Auto-Scrap-Ography", can be seen below. In the clip, Michaels talks about what really happened between him and Stevie Nicks when they recorded "Love's A Hard Game To Play", a song that he had written for inclusion on her first retrospective release, 1991's "Timespace: The Best Of Stevie Nicks".

In the liner notes for "Timespace", Nicks wrote about "Love's A Hard Game To Play": "This song was just brought to me barely two weeks ago by a most extraordinary young man. One of these men who has everything — beauty, sensitivity, warmth, and a love for life that I had not seen in a long time. I recorded his song, singing it for him to the best of my ability, hoping that the people would love the song as much as we loved doing it. A new friend, in this business, who asks for nothing but for me to be happy is a very rare thing. I hope he will remain my friend for a long time, because finding someone like him seldom happens in one's lifetime. But when it does, there is nothing like it. He was happy, because I believed in him. And he has brought something back to me that I thought I had lost... my laughter."

"Bret Michaels: Auto-Scrap-Ography", which is available in both e-book and hardcover formats, is handwritten by the artist, detailing his journey even up to and including his battle with diabetes and the coronavirus pandemic.

This past June, POISON, MÖTLEY CRÜE, DEF LEPPARD and JOAN JETT & THE BLACKHEARTS announced that "The Stadium Tour" has been postponed until the summer 2021 due to the coronavirus pandemic.