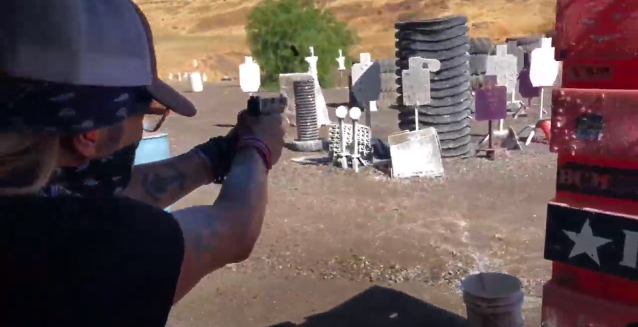 POISON frontman Bret Michaels is working with Taran Butler, a 23-time Southwest Pistol League champ who has earned a national reputation as Hollywood's go-to weapons trainer, on his first action/suspense streaming series tentatively titled "The Music Man". Production on the show is set to begin when CDC guidelines allow, possibily in early to late fall.

Video footage of the first day of training is available below.

Back in 1998, Michaels starred in, directed and produced a psychological thriller film titled "A Letter From Death Row". Sheen/Michaels Entertainment, his production company with actor Charlie Sheen, went on to produce "No Code Of Conduct", "Free Money" and "In God's Hands".

Last month, POISON, MÖTLEY CRÜE, DEF LEPPARD and JOAN JETT & THE BLACKHEARTS announced that "The Stadium Tour" has been postponed until the summer 2021 due to the coronavirus pandemic.

Another awesome photo from the training for my first ever action/suspense film tentatively titled #TheMusicMan. In this photo, L-R - J.J. Perry, @TaranTactical, myself, @TetianaGaidar & Dennis McCarthy. More to follow...🤘🏻 pic.twitter.com/rANfm5Ow7J