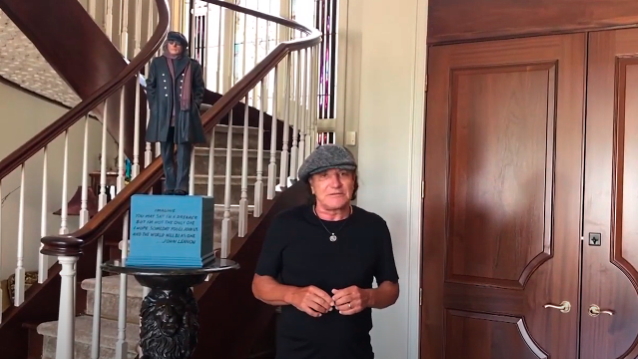 On Saturday (May 2),AC/DC fans took part in a six-hour celebration of the band's legendary frontman Bon Scott, as this year's edition of the annual Bon Scott international festival, Bonfest, went virtual after the coronavirus pandemic forced organizers to pull the plug on the three-day event.

According to TheCourier.co.uk, Scott's successor in AC/DC, Brian Johnson, delivered a special video message to the virtual Bonfest audience, assuring them that the event — which takes place in the Scottish town of Kirriemuir — will be back "bigger and better" in 2021.

Brian said: "Hey everybody. I know you're all disappointed that the Bonfest is not going to be on this year, but as you know, this virus has got everything pretty screwed up. But I'm sure it will be back next year bigger and better and we can all go and celebrate our favorite singer's life.

"I've got nothing much to say except the fact that I'm as bored as all you are. I just want to get out there. Keep tight, stay safe and we'll see you all again. As Bon would have said, 'Ride on. 'We'll see you then."

Kirriemuir was home to a young Ronald Bedford Scott until the age of six, when his family left Scotland for Fremantle, Western Australia.

Scott was invited to join AC/DC by Glasgow-born brothers and founding members Malcolm and Angus Young in 1974, and achieved international stardom before his death at the age of 33 in 1980 from alcohol poisoning.