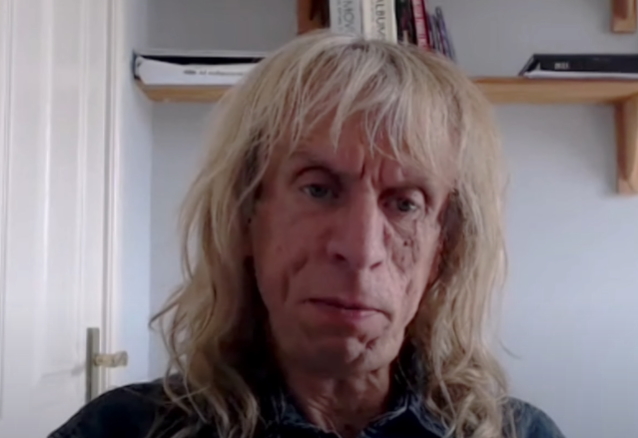 BRIAN TATLER: 'If METALLICA Hadn't Covered DIAMOND HEAD, I May Have Looked Elsewhere For Employment'

DIAMOND HEAD influenced a slew of early '80s thrash metal bands, in particular METALLICA, which recorded "Am I Evil?" as a B-side to their 1984 "Creeping Death" single and again included on the band's multi-platinum 1998 covers album "Garage Inc." METALLICA would record three additional DIAMOND HEAD songs: "Helpless" ("Garage Days", 1987),"The Prince" ("One" single B-side, 1989) and "It's Electric" ("Garage Inc.", 1998).

In a new interview with Metal Pilgrim, DIAMOND HEAD guitarist Brian Tatler was asked if he thinks his band would not have been able to continue as a viable business entity had METALLICA covered any of his songs. He responded (as transcribed by BLABBERMOUTH.NET): "I think if METALLICA hadn't covered DIAMOND HEAD — the first cover was '84 when they did 'Am I Evil?' on the B-side of 'Creeping Death' — so I think if they hadn't, I may have looked elsewhere for employment. I think it would have been harder to keep DIAMOND HEAD going without that introduction to their fanbase. 'Cause that record sold millions of copies — versions of 'Am I Evil?' have sold millions of copies through METALLICA — and so so many more people know DIAMOND HEAD thanks to Lars [Ulrich] and Co. And it may be that a lot of the opportunities that we get now would not be there without that METALLICA connection. So I'm eternally grateful. Obviously, myself and Sean [Harris, original DIAMOND HEAD singer] still get writers' royalties, but even so, I just think it's helped DIAMOND HEAD as a name and a brand to get on more and more opportunities — get festivals and supports. Because they link it with METALLICA; they think, 'Okay, well, you're potentially tapping into a huge market.'"

Two years ago, Tatler said during an episode of "Tatler's Tales" about METALLICA's cover versions of his band's classic songs: "They're great. They're always more powerful and a little faster than the DIAMOND HEAD versions. I mean, they're a great band. They [have] their own sound. Of course, it was very flattering. The first song they covered was 'Am I Evil' They were the first band that ever covered a DIAMOND HEAD song. And it came out in 1984; it was on the 'Creeping Death' 12-inch single, which was on Music For Nations. And I was just really flattered that 'Lars's band' had covered one of our songs and done such a respectful job and worked out the guitar solo. Everything was really good — really close to our version, but a bit more modern, a bit tougher, [with] more attitude."