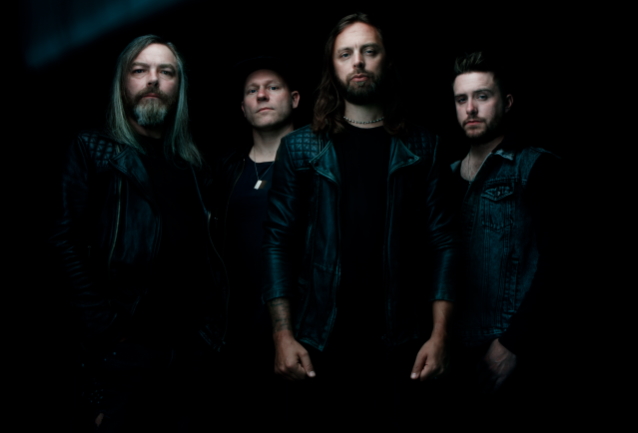 In a new interview with "Whiplash", the KLOS radio show hosted by Full Metal Jackie, BULLET FOR MY VALENTINE frontman Matt Tuck spoke about the band's decision to pursue a more technical, aggressive direction on its latest, self-titled album, which arrived last November via Spinefarm/Search & Destroy. The LP was written beginning in September 2019 with longtime producer Carl Bown, who co-produced the band's 2015 album, "Venom", and produced and mixed 2018's "Gravity".

"We came off the back off 'Gravity', which was not a technical record. For us, that album was all about emotion, it was all about the story, it was all about the vocal performances and the lyrical content," he continued. "And it was more an emotive, personal kind of album. And this time around, it became clear, after we kind of found those couple of key tracks, that this album was very different — it was very technical; it was very in your face; it was very aggressive. And we just loved that they had that contrast, and it just had its own identity and had its own moment in time in the band's catalog now. And yeah, I think because we hadn't kind of shown that skillset for a long time — since 'Venom' — and having starved ourselves of writing in that way, in a sense, that as soon as we did, it was just like four or five years' worth of stuff was just kind of flooding out. It was just a natural thing, and we just rode the wave, and the more we kind of rode it, the more technical and aggressive the songs were becoming. And it was great. It just put a smile on our face that we could showcase the heavier, more technical side of the band."

BULLET FOR MY VALENTINE released a deluxe version of its self-titled album in July via Spinefarm/Search & Destroy. This extended release features four brand new tracks, plus "Stitches", a song previously only available as a Japanese exclusive. Following the CD and digital releases, a vinyl pressing will launch on November 11.

Last December, Tuck was asked by NME whether he thinks BULLET FOR MY VALENTINE's next album will be a mixture of "Gravity" — which he had previously described as "probably our most mellow/experimental record" — and the self-titled LP. He said: "It really depends. In a year's, two years' time, whenever we decide to kind of get involved with that, we're just gonna do what we do — we're gonna see what comes out, what feels natural, what makes us happy, what makes us scared, what makes us motivated. And coming off the back of 'Gravity' and this album, we're just gonna that whole process of confidence and no-fear attitude into the writing process, and as soon as we start smiling and high-fiving, that's when we'll know we're on the right track."