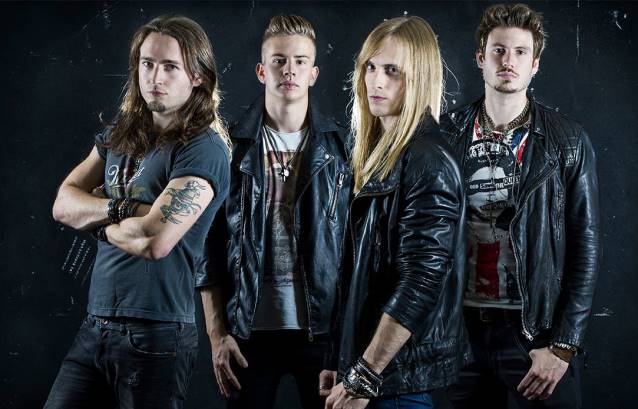 "Favourite Sin", the debut EP from CAGE THE GODS, a sensational new British rock band that fuses together rock 'n' roll culture from the four corners of the U.K., can be streamed in its entirety using the SoundCloud widget below.

In a thunderously blues-inspired fashion, laced with soaring Celtic rock vocals, all of which creates something powerful, something unerringly familiar yet instantly gripping, CAGE THE GODS spent most of 2012 writing and producing its debut album and "Favourite Sin", due out November 25 via The End Records.

Citing stalwart names such as AC/DC, BON JOVI and GUNS N' ROSES as key influences, the Irish-Scots-English-Welsh quartet, which features Peter Comerford on lead vocals, Jam (guitar),Colin Jones (drums) and Mitch Witham (bass),has garnered great early support from highly regarded publications such as Classic Rock magazine, which upon profiling the band in a full-page article in their September issue offered the sanguine sentiment "these British rockers could be huge."

The "Favourite Sin" EP is backed with "From The Start", "Wake Up", and an acoustic version of "Sacrifice".

Commented on the underlying theme of "Favourite Sin", the group had this to say: "We all have that one thing... that taboo... that guilty pleasure... the forbidden fruit that we know probably isn't good for us, but is just too goddamn enticing to ignore! Well, 'Favourite Sin' is about leading the innocent down that path... showing them the hidden bliss within their darkest guilty secret!"

The new video for "Favourite Sin", directed by U.K. rock and glamour model photographer Nigel Crane who is widely known for photographing some of today's biggest musical acts along with producer Angus Cowan, is a stunning performance while showing the dark temptations that can effect the most pure of heart.

Having recently supported HEAVEN'S BASEMENT and TRACER, CAGE THE GODS is currently on tour in the U.K. supporting THE ANSWER before embarking on some end-of-year headline shows followed by touring North America in early 2014. Lead singer Peter Comerford says: "We are incredibly excited about bringing our rock n roll to the USA, the home of great rock music. Our sound and approach has been heavily influenced by some of the great U.S. rock acts and we hope that we can deliver an equally compelling show that U.S. fans will love!"

Find more on Cage the gods