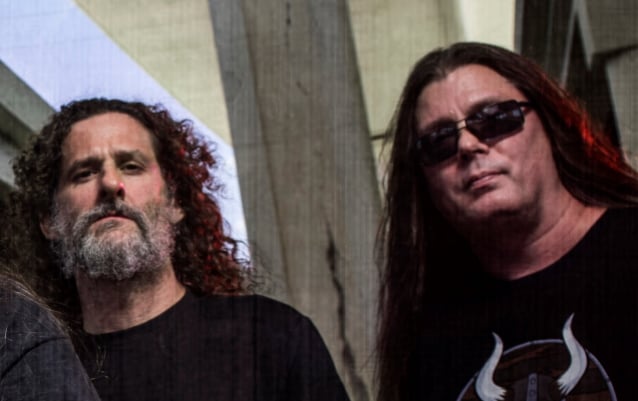 O'Brien was arrested in Florida more than two years ago on charges of aggravated assault on a law enforcement officer and burglary of an occupied dwelling with assault. Deputies said he burglarized a house and charged at a deputy with a knife. He has since been replaced in CANNIBAL CORPSE by Erik Rutan, one of the death metal's most acclaimed guitarists who is known for his time as part of MORBID ANGEL throughout the '90s and early 2000s, as well as handling vocals/guitars for HATE ETERNAL.

Asked in a new interview with Pierre Gutierrez of Rock Talks what his relationship with Pat is like nowadays and whether the two still talk from time to time, Paul shook his head from side to side and replied simply: "No comment on that."

O'Brien, who was born in Northern Kentucky, was arrested on December 10, 2018 for burglary and assaulting a police officer while his Florida home was in flames.

O'Brien allegedly broke into a Northdale, Florida home and shouted that "the rapture is coming" before pushing a woman to the ground. He ran toward a responding deputy with a knife and was subdued with a stun gun.

O'Brien, who had been a member of CANNIBAL CORPSE for more than two decades, was released from Hillsborough County jail on December 14, 2018 after posting a $50,000 surety bond. Several days earlier, at a hearing, a judge told the now-55-year-old musician, clad in an anti-suicide vest with his hands and ankles chained together, that he would first have to pass a drug test before he would be allowed to post bail and leave jail.

According to Fisher, most of the CANNIBAL fans were very supportive of Pat while he was dealing with his ordeal. "In the metal world, I think in general, 95 percent [of the people], everyone was, like, 'Get well soon,'" he told "The Jasta Show". "I didn't spend too much time reading stuff online, because that's when you get people who just wanna say nasty stuff just to be nasty."

Fisher went on to say that he and his bandmates were looking forward to O'Brien's return to CANNIBAL CORPSE.

"We love him," he told "The Jasta Show". "We want him back. But when I saw him in the court with the vest, dude, I cried. Because we just got home from tour… We wish the best for him, and we're just waiting to see [what happens]. He's got a road ahead of him still with legal issues, and that's out of our hands. We support him 100 percent; we're behind him 100 percent."

CANNIBAL CORPSE will release its 15th studio album, "Violence Unimagined", on April 16 via Metal Blade Records. Rutan lent his guitar as well as production skills to the effort, which was recorded at his Mana Recording in St. Petersburg, Florida. Rutan previously produced four CANNIBAL CORPSE albums (in addition to "Violence Unimagined"),alongside the likes of GOATWHORE, SOILENT GREEN and BELPHEGOR. Filling in live on guitar since 2019, in 2020 he became a full member, contributing to the writing process.