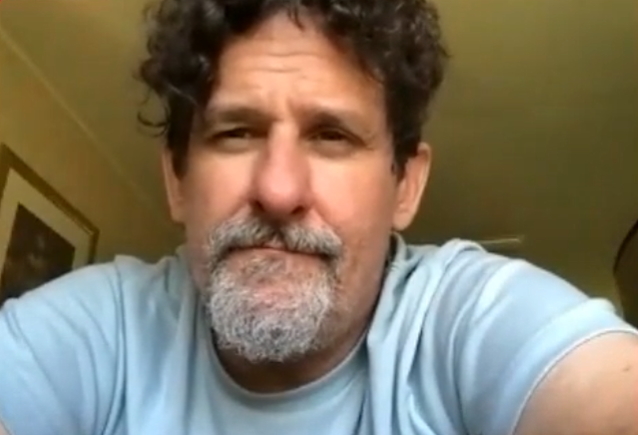 CANNIBAL CORPSE Drummer Doubles Down On COVID-19 Vaccine Comment, Says He Is In No Rush To Get It

Drummer Paul Mazurkiewicz of veteran Floridian death metallers CANNIBAL CORPSE has doubled down on his statement that he is in no rush to get the COVID-19 vaccine to help stop the novel coronavirus from spreading.

Earlier this month, Mazurkiewiczmade headlines in the metal world when he told Finland's Kaaos TV that "it kind of stinks" that he may be "forced" to take the vaccine in order to be able to tour internationally with CANNIBAL CORPSE.

"In a personal sense, I don't know if I would [get the vaccine], per se," he said. "It's a good question. I'm not sure. The flu shot has been readily available, obviously, for years, and so many people always just got a flu shot, and I know a lot of them as well. But it wasn't anything that I felt that I neeed to get. So, yeah, I'm just weird about being forced to take something. It's a touchy subject, of course, so I don't know if I will get one or not, unless I have to."

After Mazurkiewicz's comments were first published on BLABBERMOUTH.NET and later picked up by other metal web sites, he was accused by some fans on social media of being an anti-vaccine conspiracy theorist. He has since addressed the controversy in a new interview with Pierre Gutierrez of Rock Talks, saying that he was aware that his original comments had generated heated comments from both sides of the vaccination debate.

"I saw it on Blabbermouth, and I didn't even read any of the replies or the comments," Paul said (as transcribed by BLABBERMOUTH.NET). "I was just, like, people are gonna talk no matter what; they're gonna have opinions. So I'm, like, I'm not even gonna bother. So I don't even really know what was said other than… Who the heck am I to even cause controversy, kind of a thing. So I don't know, man. It's just silly, I think, that it would cause any stir, I guess. But it is what it is… I said what I said, I guess. I guess that's what I believe, because I said it, right?!

"Everyone's got different views and everything," he continued. "And I'm not sitting here going, 'My God, I can't wait to get the shot.' I'm not — that's the truth. Will I get it? Maybe. I don't know. If I have to get it, I guess I have to get it. But I'm not sitting here going, 'Right, I'm going to get it,' or I'm thinking about it, like, 'Oh, as soon as it's available, I'm going tomorrow to get it.' I just don't think that way. So, who knows?"

The poll, released on March 5, found that 69 percent of adults say they are going to receive the coronavirus vaccine.