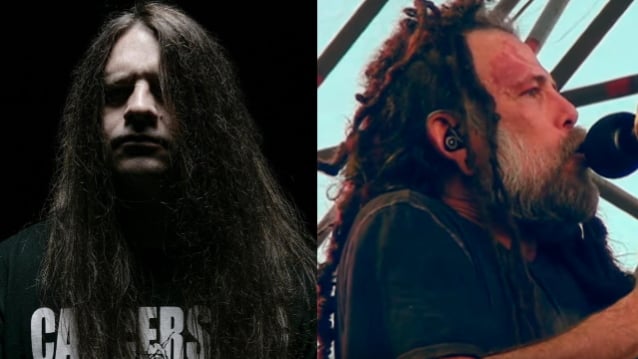 CANNIBAL CORPSE singer George "Corpsegrinder" Fisher has seemingly taken issue with Chris Barnes's recent comment about the state of the death metal genre, saying the scene is "just as great as it's ever been."

Last month, Barnes — who exited CANNIBAL CORPSE in 1995, one year after the release of the band's "The Bleeding" album — took to his Twitter to say that he saw a January 19 Knotfest"A Death Metal Round Table" hosted by Staypuft Mallow and featuring appearances by Fisher, Trevor Strnad from THE BLACK DAHLIA MURDER, Chase Mason from GATECREEPER and Alex Jones from UNDEATH."I just watched a 'death metal' podcast on YouTube that was done about a week ago with the 'top' death metal vocalists," he wrote. "It made me physically ill. I despise what this genre has become."

In a new interview with Elliott Fullam of Little Punk People, Fisher, who is promoting his upcoming debut solo album, weighed in on the state of the death metal scene, saying: "GATECREEPER is pretty cool. I saw a band, FROZEN SOUL, I saw them. There's a bunch of bands going now. The scene is just as healthy as it's ever been. It's just as great as it's ever been. It's not dead. It's not terrible. I'm proud of the death metal scene today. I'm so proud of it — I think it's amazing. I think there's so many great bands.

"Look, we're going out on tour with REVOCATION and WHITECHAPEL — two awesome, great bands. And the scene couldn't be better," he continued before seemingly taking a swipe at Barnes. "And anyone who thinks otherwise, kiss rocks because… I'm proud of the death metal scene. And I encourage everyone to go out…

"Listen to the old bands, of course, " Fisher added. "The old way paved the way. Go listen to POSSESSED; they're the first death metal band. Go listen to them. Listen to everything in between. Listen to KREATOR who, I think, are kind of the bridge, a death-thrash band. Without KREATOR, there would be no CANNIBAL CORPSE. Listen to those bands, and listen to, obviously, all the old classic bands like CANNIBAL and DEATH, OBITUARY, DEICIDE, MORBID ANGEL — I mean, all those bands. Then you have AEON, you have THE BLACK DAHLIA MURDER and DYING FETUS, and, like I said, newer bands. GATECREEPER has been around for a while. There's so much great death metal going on. The scene has never been better, and anyone who thinks otherwise, you know, just… I don't know what to tell you."

After Barnes left CANNIBAL CORPSE to form SIX FEET UNDER, he was replaced in the former band by Fisher.

Fisher's solo album, titled "Corpsegrinder", will be released on February 25. The 10-song effort was co-produced by Nick Bellmore (DEE SNIDER, KINGDOM OF SORROW) and Jamey Jasta (HATEBREED) and will be made available through Jamey's new label, Perseverance Music Group.