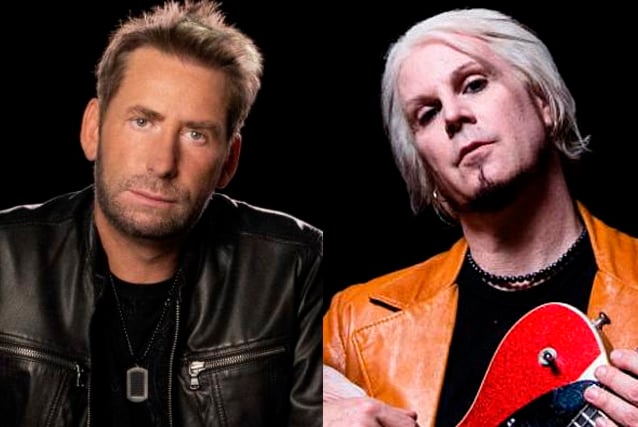 Speaking to Meltdown of Detroit's WRIF radio station, Kroeger stated about the experience (as transcribed by BLABBERMOUTH.NET): "We all got to go down to this spot that Tommy's got this love for. It's about an hour north of Puerto Vallarta. It's called Punta Mita. And there were tons of us there. It's really strange, though, being friends with Tommy, and Nikki shows up. So there's Tommy and Nikki there. And, like, the 13-year-old fanboy in me, I'm trying to suppress that, push it down [laughs] — push it down. [Laughs] 'Don't fan out, dude. Don't.'"

Chad also talked about John 5, who recently revealed he will step in for guitarist Mick Mars on the upcoming MÖTLEY CRÜE tour after Mars, who is 71, decide to retire from the road due to his battle with the debilitating disease ankylosing spondylitis. Ankylosing spondylitis is a type of arthritis that causes inflammation in the spine joints and ligaments and can lead to stiffness over time, according to the National Institute Of Arthritis And Musculoskeletal And Skin Diseases.

"John's incredible," Kroeger said. "He brought his guitar [with him to Mexico]. 'Cause we were there for — I think we were there for, like, five days. So on one of the nights, John brought a guitar out. And a lot of people were heading to bed. And it was just, like, John and Tommy and myself. I think Deadmau5 [Canadian electronic music producer and DJ] might have stayed up with us that night as well. John just played… 'Cause now I'm allowed to say that he's gonna be filling in for Mick for the rest of the tour. And so he just sat there and played every single MÖTLEY CRÜE riff that's ever been written and recorded — flawlessly. Flawlessly. You don't need to put on music when you've got that kind of talent just sitting right there. I mean, he was just running the gamut, and it was fantastic."

John 5 is one of the credited co-writers on the three original songs on CRÜE's "The Dirt" soundtrack. John 5 has also collaborated with Sixx and Desmond Child on Meat Loaf's "The Monster Is Loose". Last year, Sixx and John 5 launched the L.A. RATS supergroup in which they were joied by Rob Zombie and drummer Tommy Clufetos.

John 5 said: "I'm honored to carry on Mick's legacy and am looking forward to playing these songs."

Last month, it was announced that MÖTLEY CRÜE and DEF LEPPARD will go global in 2023 with their co-headline "The World Tour". Produced by Live Nation, the trek will kick off on February 18, 2023 at Foro Sol in Mexico City and include stops throughout Latin America before heading to Europe in May 2023.