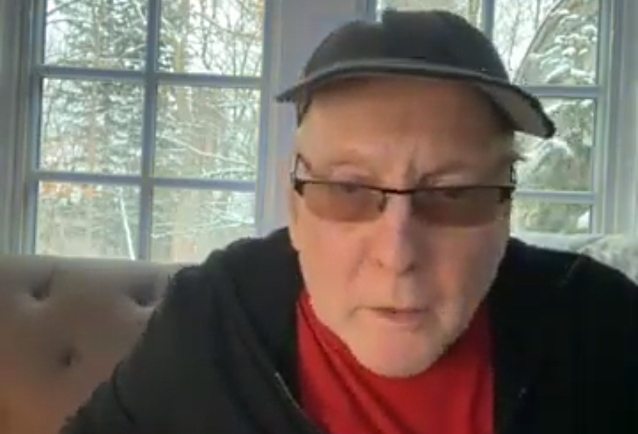 CHEAP TRICK's RICK NIELSEN: 'I Was The First Guy To Ever Take BON SCOTT Have Mexican Food'

In a new interview with Noise11.com, CHEAP TRICK guitarist Rick Nielsen spoke about his long-running friendship with Australian hard rock legends AC/DC. He said (as transcribed by BLABBERMOUTH.NET): "I had Angus [Young] and Malcolm [Young], and Cliff [Williams] came to my house in 1979. I was the first guy to ever take [late AC/DC singer] Bon Scott have Mexican food; he had a taco and Scotch. They were sweet guys. I mean, we loved them. They were just the ultimate. There's a version of us doing 'Johnny B. Goode' with Robin [Zander, CHEAP TRICK vocalist] and Bon singing and Angus playing with us.

"The last time I saw those guys was right before Malcolm had died," he revealed. "I went to see them on their last show of the tour; it was in Nashville. And the friend that I flew down with and myself were the only guys they allowed backstage. I walked in, and they said, 'Hey, Rick, you're still living in Rockford?' 'Yeah, I am.' [Laughs] They're sweet guys."

CHEAP TRICK's 20th studio album, "In Another World", will be released on April 9 via BMG. Produced by longtime associate Julian Raymond, it marks CHEAP TRICK's first full-length effort since 2017's double-header of "We're All Alright!" and "Christmas Christmas".

In September, CHEAP TRICK released a cover version of David Bowie's "Rebel Rebel". The track was engineered and produced by Jack Douglas.

Back in 2018, CHEAP TRICK released a single called "The Summer Looks Good On You" and followed it up with 2019 updates of Harry Nilsson's "Ambush" and John Lennon's "Gimme Some Truth".

A career highpoint for the quartet was its 2016 induction into the Rock And Roll Of Fame, where it accepted its award before performing three of its hits — "I Want You to Want Me", "Dream Police" and "Surrender".