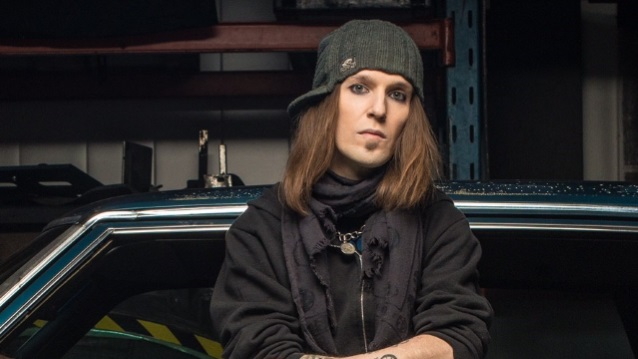 CHILDREN OF BODOM Frontman Doesn't Write Much Music On The Road

CHILDREN OF BODOM frontman Alexi Laiho has confirmed to Metal Master Kingdom that his band will begin recording the follow-up to 2015's "I Worship Chaos" album this spring.

"We're just gonna keep working on the new music, and we're gonna enter the studio in March," he said in an interview that was conducted in late November (see video below). "So there should be an album coming out next fall."

Asked if he has been working on any new music while on tour, Laiho said: "I don't really do writing on the road that much. 'Cause the thing is that when I write, I need to be alone, I need to shut everything down and I can't really focus when I'm on the road, 'cause I've got no privacy anywhere. You're living with 10 other dudes on a bus, and it's just kind of chaotic out here. I get a lot of ideas and sometimes I write 'em down and sometimes not, but I don't do anything with them until I get back home and get in the writing mode."

CHILDREN OF BODOM's new disc will once again be recorded at the band's own Danger Johnny Studios in Helsinki where the group's last two efforts were laid down.

CHILDREN OF BODOM's recently completed U.S. tour saw the band celebrating the 20th anniversary of the release of its debut album, "Something Wild". The 24-date trek kicked off on October 31 in Dallas, Texas and included an appearance at this year's Ozzfest Meets Knotfest.

Ex-CHILDREN OF BODOM guitarist Roope Latvala claimed in an interview last summer that he was "stabbed in the back" by his former bandmates.

Latvala was a member of CHILDREN OF BODOM for more than a decade before being dismissed from the group in May 2015. His exit came just as the band was preparing to enter the studio to begin recording "I Worship Chaos". He has since been replaced by former NORTHER guitarist Daniel Freyberg.