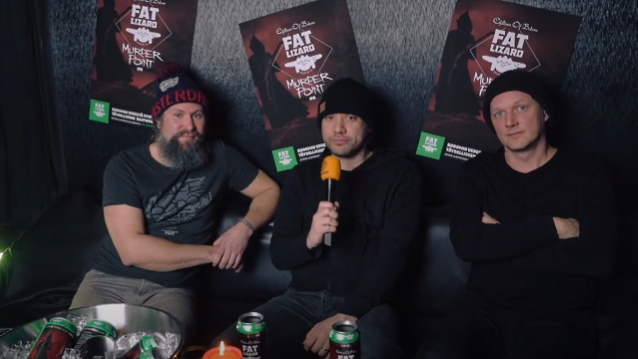 CHILDREN OF BODOM's Surviving Members Open Up About Band's Split, ALEXI LAIHO's Death: 'The Fans Have A Right To Know What Happened'

Former CHILDREN OF BODOM members Jaska Raatikainen (drums),Henri "Henkka T. Blacksmith" Seppälä (bass) and Janne Wirman (keyboards) have opened up about the real reasons behind the band's breakup, explaining that "the fans have a right to know what happened."

Raatikainen, Seppälä and Wirman announced their departures from CHILDREN OF BODOM in October 2019. A couple of months later, they issued a statement denying that they quit because they had families to support or wanted to retire. "Music is our profession and our lives, and all our families know that," they said at the time.

CHILDREN OF BODOM frontman Alexi Laiho passed away on December 29, 2020 in his home in Helsinki, Finland. He died of alcohol-induced degeneration of the liver and pancreas connective tissue. Furthermore, Laiho had a cocktail of painkillers, opioids and insomnia medication in his system. He had suffered from long-term health issues leading up to his death.

In a brand new in-depth interview with Finland's Helsingin Sanomat, Raatikainen, Seppälä and Wirman discussed publicly for the first time the circumstances that led to CHILDREN OF BODOM's split and ultimately Laiho's death.

According to the three surviving members of CHILDREN OF BODOM, the real reason for the band's breakup was not that they wanted to stop touring in order to spend more time with their families, which is how Laiho explained it to Helsingin Sanomat in November 2019. Instead, what caused the group to split was Laiho's substance abuse, and that is also what eventually killed him a year after they went their separate ways.

Laiho's addiction began to take a serious toll on CHIDLREN OF BODOM in 2008, when the band was the support act on a SLIPKNOT tour. In the ensuing years, Laiho promised his bandmates that he would not drink on the road anymore. Although he kept his word for a few years, Alexi "went into a tailspin again in 2016," according to Wirman. Laiho, who had a substantial income as COB's main songwriter (all other income, from gigs to merchandise, was split equally),repeatedly complained that his income was declining and threatened to pull himself out of the limited liability company, AA & Sewira Consulting Oy, he and the other members formed in 2003.

After CHILDREN OF BODOM's manager brought up Laiho's substance abuse at a business meeting in New York in early 2019, Alexi refused to go into rehabilitation but did agree to see a doctor. He was diagnosed with diabetes, and he began taking medication to treat the condition.

In the summer of 2019, Laiho filed an application with the Finnish Patent And Registration Office to register the CHILDREN OF BODOM name to Laiho. This infuriated his bandmates who saw this as an attempt to hijack the name and brand that was controlled by the group's LLC.

During CHILDREN OF BODOM's tour of Russia in October 2019, Laiho "was hitting the bottle like back in 2008," his bandmates told Helsingin Sanomat.

"I told Alexi that you don't usually drink starting at breakfast before a gig, and now you don't even warm up with the guitar before going on stage like you always do," Raatikainen recalled.

Laiho later apologized and stopped drinking for the last concerts of the tour.

"His hands were shaking for two days, but the gigs in Moscow and St Petersburg went pretty well," Raatikainen said.

Raatikainen, Seppälä and Wirman decided to go with Alexi's wish from a few years back and buy him out of the LLC. Laiho retained the rights to his music and was paid royalties on performances and record sales as before, but sold his part of the LLC that owns the name of the band and the merchandising rights.

According to the trio, Alexi was sober for CHILDREN OF BODOM's entire final tour of Finland in December 2019 and he "exchanged cordial messages" with them even after the start of the pandemic.

Alexi's sister Anna Laiho told Helsingin Sanomat that the three surviving members of CHILDREN OF BODOM "have the full support of our family."

Anna, Alexi's Australian wife Kelli Wright-Laiho and a few close friends attempted to get him professional help in the fall of 2020, but he refused.

"At heart, he was a warm and caring person, always ready to help others. But he had his demons, and he wanted to fight those alone", Alexi's sister said. "He wanted to make his own choices. For better or worse."

Alexi's ashes were buried in December 2021 — nearly a year after his tragic passing. He was laid to rest at the Malmi Cemetery, a large cemetery located in the Malmi district in Helsinki, Finland.

Alexi and Jaska founded CHILDREN OF BODOM in 1993, and the band was one of the most internationally acclaimed metal acts in Finland up until their very last farewell concert in December of 2019. In 2020, Alexi put together BODOM AFTER MIDNIGHT, which recorded three songs and shot one music video, all of which were released posthumously.